Deconstructing claims about the mortgage crisis

Yet again I'm fighting with GOP partisans about what caused the mortgage crisis. The GOP partisans will say something like this: [click through to see comments]


"The crash was a direct result of Democrat policies forcing/allowing very risky lending. Get your history correct."

I won't repeat their entire narrative of how Dems forced banks to make risky loans to minorities, which were funneled through Fannie and Freddie, put the government on the hook, and all that bad paper caused the financial crisis of 2008 and subsequently the long recession.

Here's what I think happened, with me trying to be as fair as possible and without evidence to back each individual piece.
That pretty much sums up the reason behind the GOP narrative about CRA, Fannie, Freddie, and the Dems causing the financial crisis.

What the narrative leaves out other players who had a much larger role in the financial crisis. The big banks envied the profits that Fannie and Freddie were raking in due to their unfair advantage in borrowing. The big banks went after the highest profit area, which was subprime lending, and they inflated number of mortgages a great deal. But all this occurred within a decades-long housing boom, a boom in mortgages, a boom in home equity lending, and a housing price bubble. I frankly don't know how much of the crisis was due to poor lending standards and how much was due to the housing bubble, or whether anyone can unscramble those pieces. However, it clearly wasn't all due to Fannie and Freddie.

Yet, when you read some explanations (like this), it seems that it was all Fannie/Freddie's fault:

"Moral hazard was everywhere and endemic. The biggest source was in the GSEs [Fannie and Freddie]. The GSEs were entirely moral hazard."

Beware narratives that say Fannie and Freddie weren't part of the problem. If that were true, why did they need almost $187 billion in bailout money?

Remember that the GOP weren't the thwarted would-be heroes. They went after Fannie and Freddie for political reasons, while using lending concerns as the pretext. This becomes clear when you realize that the GOP warnings completely ignored the even larger problems brewing at the big banks. The Dems, likewise, defended Fannie and Freddie for partisan political reasons. The alarms that should have been heard and heeded were smothered by politics.

What I haven't worked out yet is why a crisis in bad housing securities became a more generalized financial crisis. There are plenty of explanations I could give off the top of my head, but I'm not sure they're right. I also don't know the role of other financial inputs such as collateralized debt obligations (CDOs) or credit default swaps. Understanding that may be beyond my capabilities. Frankly, I don't even know where to start to research on those aspects of the financial crisis. But I've researched enough to clearly declare bullshit on some of the claims, and back it up with solid data. Solid data - this is a good thing.

"Government housing policy failed homeowners and taxpayers and it is important to understand why. The GSEs contributed to the meltdown. The direct cause of the crisis was the proliferation of poorly underwritten and risky mortgage products. The majority of these products, and the most risky products, were funded through private label securitization." [emphasis added]


Finally, putting the conclusion before the research and evidence, presented to you by the House Republicans. You've got to love the balls it takes to do this: 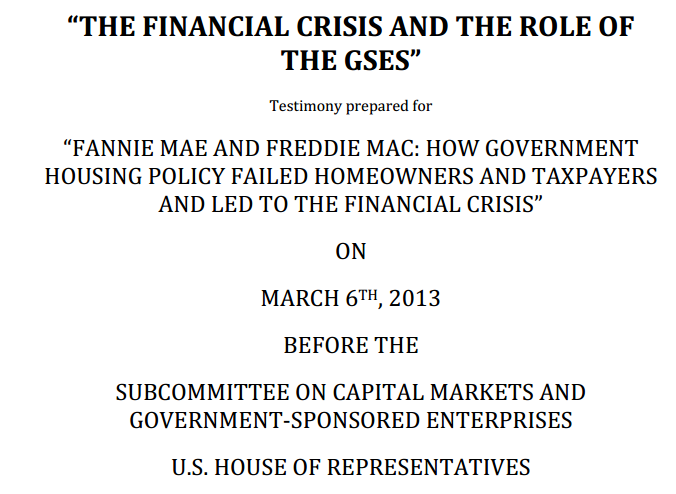 Update 3/19/18. Of course partisan hacks still pretend the mortgage crisis was all due to those miserable Dems. Here's a reminder of who wasn't the boogeyman. Oh God, I wish the liars would stop.
Posted by ModeratePoli at 2:30 PM

Who's to blame if you leave the door unlocked but crooks enter and steal your stuff?

What if you left it unlocked in order to allow a friend without a key to get in?

Perhaps some Dem policies left the door unlocked (with the honest motive to allow lower-income people to enter the market), but let's not forget that the GOP controlled Congress from 1994 on.

GOP-supporting constituencies made the best of the new rules -- which would have been rescinded otherwise -- and lots of lower-income people took on more dent than they could pay back, once bid-up home value inevitably fell.

So 98% of the blame falls on the crooks. Too bad they didn't lose more money when the MARKET revealed their hubris and error.

There are obviously so many angles on this story. The origin was helping people previously discriminated against. That was good, and I doubt that it was overly aggressive.

At some point the program did get more aggressive (if reports are accurate--a big if). My sense is that many big banks went into this lending very happily and greedily, not because they were pushed.

The rise in home ownership was lauded during both the Clinton and Bush administrations. Concerns tended to be sidelined or targeted in partisan ways. The hearings on the GSEs during the Bush administration were more partisan than prescient. They dropped the warnings when they weren't successful in depriving Dems of campaign donations, and they didn't ever have general concerns.

It's too bad that the GSEs did become political contributors and therefore politicized. Maybe without that, some warnings would have stuck, but we'll never know.

Your analogy of leaving the door unlocked doesn't capture the issue for me. The situation is too complex for something so simple.

I think I used to blame Bush more for the financial crisis than I do now. I understand the complexity, the Democratic role, and the partisan roadblocks more than I had. On the other hand, it is the responsibility of president and Congress to keep the country safe and orderly. They failed after not even trying very hard. That's terrible performance for people in high office. (Just thinking about this is making me very angry at Congress right now.)

Caleb B - from bloomberg view

The CDOs served to expand credit, which drove lower lending standards...both in the private mortgages and the GSE mortgages. The GSEs were tired of losing market share, so they lowered standards too. The % of mortgages that were Alt-A and Subprime increased as a share of total mortgages, reflecting weaker borrowers. This pushed all housing prices up, then incited speculation. Cashout refis let people spend money based on equity gains that turned out to be fake.

Eventually, the bubble has to burst as the weakest of borrowers fail to make the first few months payments. This causes prices to fall, leading to a dramatic drop in the value of CDOs/MBS. This causes the banks to crash, which crunches the credit to other businesses, causing the loss of sales, causing the stock market to fall, causing panic and hording of money, causing mass layoffs, causing recession.

Michael Lewis's The Big Short does a fairly good job of linking it all together.

(FYI - enjoyed your post. I'm glad you are taking an interest in learning more about hot topics. I certainly have learned a lot from participating and reading different opinions, so i'm glad there are more curious people out there.)

@caleb. Thanks for the praise. I should try reading The Big Short, but I find too many popular books contain too much filler.

Perhaps you can help me understand something. I thought CDO's were credit card debt or packages of bank loans, not mortgages. Is that wrong?