Sorting real from fake in the ACA claims

Yes, the website roll-out was a disaster, but that was fixable. The insurance rates weren't as awesome as Obama predicted (saving families an average of $2000). Some people are paying more for less coverage and with no access to the doctors they had before.

This isn't surprising to two groups of people: those who thought Obamacare was going to be terrible, and those who were realistic about what mandated health insurance could do. Hint: it's no magic bullet.

All this year people will be learning what the real effects of Obamacare are. Next year there will be more changes and more effects, and the year after that. Of course Obama will try to manage the situation so that Obamacare doesn't fail, delaying this and that, maybe changing some mandates for insurers.

It won't be easily to find out if Obamacare has failed, because people involved with healthcare will try to help it succeed. Doctors, hospitals, insurers, patients, lots of people other than the GOP want to see the changes improve healthcare, so this gives an advantage to the program.

The people who want to see it fail don't have the power to make it fail, but they will try to highlight all the discrepancies, disappointments, and failures. However, even if they do push the stories of the failures, it won't be believable unless you know it's true rather than political posturing.

Here's one claim by the right that is less than what it seems:


Poll: 1 in 4 voters know someone who has lost insurance under Obamacare

The problem here is that maybe the polling is correct. Perhaps only 25% of the US knows someone who's been badly hurt by Obamacare, meaning 75%  haven't been personally hurt or know anyone who has. If those were my odds, I'd run on them. I'd get up in front of crowds, introduce a few people who have been helped, and then ask the audience if they personally know someone who's been hurt. A few hands go up, but not many.

I don't know Obamacare well enough to know whether it's a bureaucratic nightmare that will eventually ruin healthcare in this country... if we never modify it where needed. The thing is, we will modify it. We will try to get it to work. If Republicans ever get in a position to repeal it, they will be forced to replace it with something better than we had in 2008.

Now, Obamacare will make healthcare more expensive for some, and it may increase overall healthcare spending. It may add wasteful, expensive paperwork to the system that is already overburdened (or so I hear). But it won't ruin the country. I'm stating that categorically because it makes no sense for 18% of the economy to allow itself to self-destruct.

(PS. In Massachusetts we were warned that Romneycare would ruin healthcare. It didn't happen. The adjustment period wasn't even horrible. Predictions like that are just a bunch of foolish bullshit.) 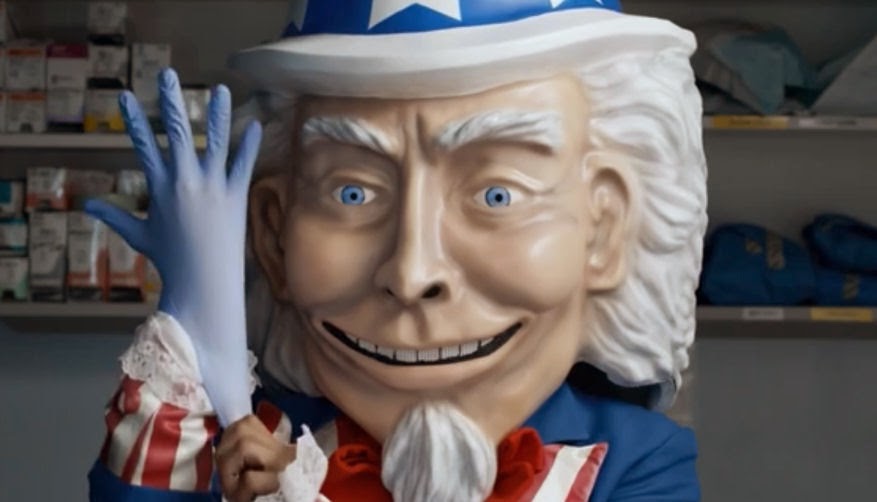 These creepy ads didn't work either.
Image: caintv.com
Posted by ModeratePoli at 10:37 PM

The problem here is that maybe the polling is correct.

I would strongly doubt that proposition. Even if we assume that the entire 25% were telling the truth, and weren't falling into the well-documented tendency of partisans to answer affirmatively to any poll question that reflects negatively on the opposite party, how do we know they know the cancellations were due to Obamacare as opposed to a multitude of other possible reasons?

@kylopod, I agree that the polling is likely to be skewed by partisan answers, but my point remains (as I wrote) that it's a pretty small MINORITY who even know someone who's been hurt by loss of insurance.

That talking point isn't going to work well in a major campaign. Midterms elections, however, are another story.