What will the upcoming GOP Congress do?

So we're likely to have a GOP House and a marginally GOP Senate next year. What can we expect?

Per David Frum: The GOP will stop worrying about the deficit amid their rush to pay off their pals.

Daily Kos: It won't happen because we'll all vote and prevail.

Howard Kurtz: Twice the investigative fun! [That should help Hillary.]

Breitbart: Tea party will own the agenda. [That should help Hillary.]

Fiscal Times: No, moderate GOP senators will own the agenda (that is, what goes for moderate these days).

So, what do I think? Well, I have to go with the past being indicative of the future. Throughout 2013, the GOP wasn't able to get it together. So I think skirmishes will continue within the party. Various pols will present their proposals and grandstand against rivals within the party. And yes, committee chairmen will run their grandiose investigations of various molehills.

I do have one caveat. If the leadership can unite the GOP during this year's campaign and they win some extra seats because of it, they may be able to keep that united front during 2015 and 2016. That's their best hope for capturing the presidency in 2016. But there are a lot of egos and a lot of pent up anger in the GOP, so I strongly doubt it will happen. 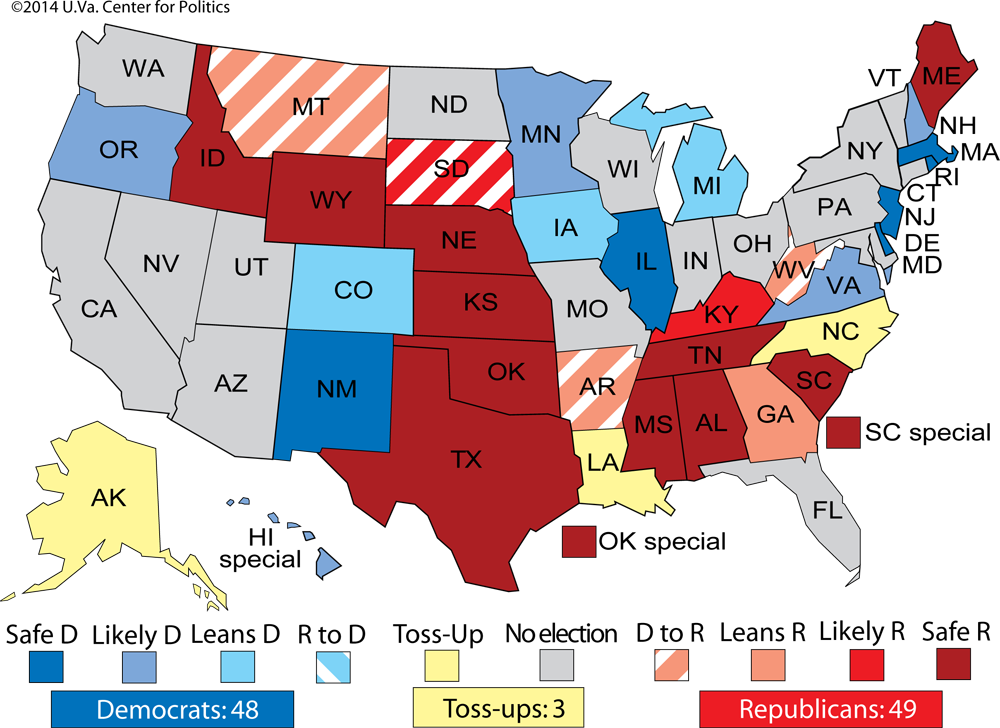 Extras. Context and another map. My detailed look at the trends in party affiliation and the Senate.
Posted by ModeratePoli at 1:20 PM

This is a nice exercise, but quite premature. The Dems will almost certainly lose some advantage in the Senate simply due to the map. And if the GOP in general had a better standing among the voters it could be a rout.

But race-by-race it is way too soon to say, even for Nate Silver. (I'm sure he issued the same caveats, but nobody likes to report those.)

Montana is hardly a sure thing and a new Dem senator just too Baucus' seat, and he's running for the full term in November. He looks and talks Montana, and is a Iraq veteran. With a Dem governor and two Dem senators, Montana can hardly be considered solid red, even if they vote that way in presidential elections.

Louisiana and Alaska are no gimmes either, with Dem incumbents with good reputations. WV and SD are almost sure to switch, and I'm guessing that the GOP will probably win one or two others. But Kentucky and Georgia are in play for Dem pick-ups, and nobody thought Heidi Heitkamp in North Dakota had a chance.

So let's speculate that the GOP only picks up net 2 seats in the Senate. Will they get the measure on election night or call it a huge victory?

I'll be writing other posts about the Senate as not a sure thing.