Brock Turner, a pretty white boy, former student at Stanford University and former swim champion, raped an unconscious woman he picked up at a boozy college party. He's trying to get one of his convictions overturned, and his lawyer is claiming he never intended to rape.

Let me explain something to you, Brock, and to anyone else who participates in the activities I'm going to describe.

There's no way, Brock Turner, you aren't a rapist. You are a rapist. Making excuses just shows that you're an unrepentant rapist.

Men who don't want to be known as rapists, here's something you can do: Don't rape anyone. Don't even get close. There's not a fine line between raping someone and not raping them. It's a very wide line, and don't even start crossing it. That's how you avoid rape, and how you avoid being a rapist. 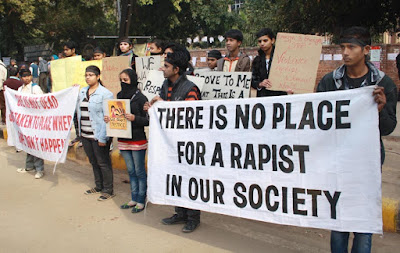 
Extras. The victim's statement is a tower of strength. No exaggeration in it, but she totally takes the defendant apart in all his slimy nastiness and double-talk.

Update 8/9/18. His appeal was rejected. The court found there was sufficient evidence for conviction, counter to his appeal claim.
Posted by ModeratePoli at 3:05 PM