I think there is a lot of fake news floating around, and I suspect conservatives channel a lot of it. Remember the scare about Jade Helm? How Seth Rich was murdered because of the DNC hack? Pizzagate? Ambassador Stevens sodomized before he was killed?

Here's one that I learned today. Peter Strzok grew up in Iran, and then moved to Saudi Arabia. From that snippet, plus a letter signed by Peter Strzok where he is identified as a Section Chief, a fake news generator spins the most marvelous stories.

Peter Strzok didn't work for the FBI but was a deep state guy who slid into whatever position was required, working both for the FBI and CIA. This is all based on Strzok's signature on an FBI letter.

According to another fake news article, Strzok was:

Did this actually happen? I looked into it, and found an article about Iran trying to skirt sanctions and buy planes.

The fake news article goes on to accuse Strzok of fixing the email investigation and then conveniently getting in on the Mueller investigation. What is this based on? "An insider." Or maybe someone making shit up.

With a quick search, I find that the FBI does indeed have 'section chiefs.' So that conclusion that Strzok really worked for the CIA was nothing but a lie.

I don't know how many people in our country work at fabricating these stories. Or how many more repeat them on youtube, websites, or fake news sites like InfoWars? How many more people then read this trash and believe it? It's insidious, and it should be exposed whenever possible. With extreme prejudice to the purveyors. 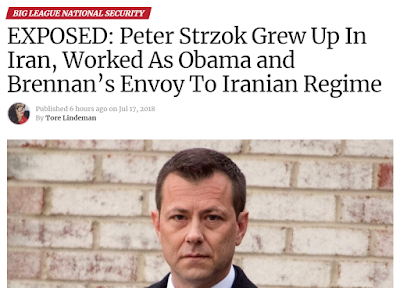 Posted by ModeratePoli at 8:26 PM