Too bad snowflakes. There is a fucking cloud over Trump's election. Russians hacked the Dems, released the materials, and it probably helped Trump. Without it, Clinton might have squeaked by and become a horrible president, giving mealy-mouthed speeches andcon making us wish it was 2020 already.

Instead, we have this ignoramus who can't accept that his PR plan accidentally landed him in the White House instead of with a bigger reality TV show.

So if you snowflakes want to pretend that nothing went wrong in the 2016 election, go ahead and look like fools.

Lots went wrong with that election. This country showed that we are well down the road to being the movie Idiocracy-- a movie where Americans have become so stupid that they don't remember arithmetic or how to grow crops. But they do listen to the twerps on TV who tell them stuff, like the FBI planned a coup against Trump and Russian hacking is simply a hoax. Some idiots believe that shit, like a twerp name Will on the comment thread here.

So you want to pretend Trump is a real president? Hey, we won the election, but he's a joke. The guy has no interest in important issues, only in his own image. He claimed to have saved the world from nuclear threat without actually checking whether that's true--because that would take work.

Hey, Italians had a bozo embarrassment as president too. I guess it's our turn. But please, don't pretend he's not an egotistical blowhard and an embarrassment. He shouldn't be president, and most people know that. It's a sad commentary on our political system that someone 100 times better didn't come along and toss him off the stage. Same on the Democratic side. This country has many good people, but our politicians suck. And considering the power entrusted to politicians, they are dragging us down with them. I'm not at all certain that we Americans will reverse this decline. It may be irreparable. By the time I'm 80, if I live that long, I may not be able to respect my own country. That is so sad. 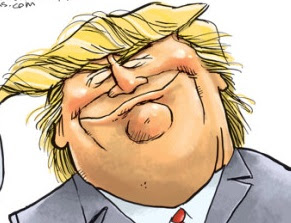