Trump, glowingly thinking he does great at summits, decided to have a summit with Putin. It was set for a Monday. The Friday beforehand, Mueller released indictments against 12 Russian military personnel for hacking the DNC and related crimes. The indictment document is an interesting read concerning who, what, where (including Indonesia) and how. A piece of icing in the indictment: a congressional candidate and a lobbyist are in big PR trouble because they requested dirt from those lovable Guccifer guys.

Then Trump went to Europe and had a one-on-one talk with Putin. Many people get very nervous about such a meeting--I don't. Trump doesn't live up to the promises he makes out loud in front of thousands of people, so he's not going to live up to any promises he makes behind closed doors. Also, I fully expect him to say foolish shit, and so does everyone else. Maybe he'll blab secrets, but our national security is aware of that so they won't brief him with anything that shouldn't be blabbed. And what he heard last week, he won't remember. Ok, clearly I'm not worried.

Prior to the summit, some GOPers were urging Trump to confront Putin about election interference, including Trey Gowdy and Ben Sasse. Yeah, likely Trump is going to stand up and do that. Trump is known mostly as a glad-hander at these summits with our frenemies. He wants to be liked, and he doesn't play tough. It was the same here. Praise for Putin.

A reporter asked him a gotcha question whether, in light of the indictments, he told Putin not to meddle. Trump meanders and essentially says that Putin denies it, and 'why would he do it?' I think 'nothingburger, Trump being a wuss again.' I was wrong.

Why is this something that finally causes a firestorm? Even Newt Gingrich came down on him--for one tweet. Some of the hosts on Fox News, especially Neil Cavuto, came down hard. More than the usual number of GOP congressmen did too, but does that really matter? It hasn't before.

I don't know why, but this time it was different. One day later (Tuesday), Trump is offering the explanation that he misspoke. It was pretty tepid, and not very convincing (though good enough for Gingrich, that louse). Here's an interesting analysis of how Trump apologizes or backpedals: "Insult, grudging apology, double down. Repeat." These were his exact words:


Let me be totally clear in saying that — and I’ve said this many times — I accept our intelligence community’s conclusion that Russia’s meddling in the 2016 election took place. [Pause] Could be other people also. A lot of people out there.

So Trump didn't really walk it back. Another attempt on Wednesday. This time, Trump finally seems more definite. Plus it's an interview with CBS, an MSM outfit instead of his softball friends at Fox News. No apology for his mistakes in the previous days, but a much stronger statement that Putin and the Russians were responsible. Currently, it's still Wednesday. Trump hasn't yet contradicted himself or softened what he said about Russian interference. Perhaps he has finally learned that he can't play that game of wink and nudge about Russian interference. Time will tell. Maybe if a month goes by and he's still on that page, it will be believable.

However, Trump is losing something--the narrative that Russian interference is a hoax by the deep state intelligence services. This isn't a small loss. So many conservative outlets have run with this fake story, as have plenty of lying congressmen. Now what?

It may be much harder for conservative media, Trump, and GOP congressmen to claim that the whole Russia accusation is a hoax and the Russia investigation is a witch hunt. I'll have to update this post in a month with info on what's happened. Real change? That would be amazing. [I'm a bit more sober today. It's hard to believe Trump will get the lesson through his thick skull. I expect more equivocation in the future, so no change.] 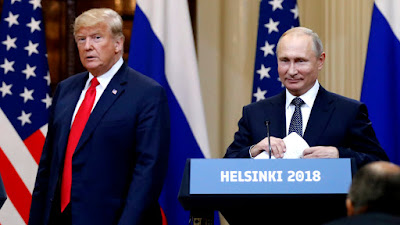 Extras. The plans of some congressmen to impeach Rosenstein will probably fizzle. Trump OK'ed the indictments prior to the summit. An explanation for why it's stupid to ask for the servers to be impounded. How White House staff got Trump to back pedal from Bloomberg and Vanity Fair. A bunch of theories about Trump's behavior toward Putin. Russia wants to move ahead on some of the agreements from the summit, but no US government officials know what those agreements are. Welcome to Trumpland! Get in line. We're still waiting for the beautiful healthcare plan.

Update maybe 7/24/18 (misplaced at first). Did Trump make deals with Putin? This is hilarious to me. I thought it would be great if the Russians had to deal with the shifting stories from Trump like we Americans have had to. Supposedly, it's been a problem. Per CNN, the Russian press has claimed there are deals, but not so fast. If they are only known to our idiot president, they don't actually count. Welcome to our world! And the cabinet and intelligence agencies have to try to figure out what Trump said. Good luck with that. It might be like analysis of a literary classic where the narrator can't be trusted--uncertain, full of speculation, and maybe fruitless. I predict no disasters because Trump isn't in control. He's basically a figurehead with no one pulling the strings.

Update 7/25/18. The Russians aren't getting anywhere, and have nothing hard to back up any claims. According to this article, they're settling for making the Americans uncomfortable by hinting. I'm surprised that's possible. Well, maybe for someone who takes Trump a bit seriously, which I don't.
Posted by ModeratePoli at 3:36 PM