Why am I looking at a FISA warrant?

But I'm looking at a warrant because the FBI requested a warrant to spy on Carter Page, an adviser to the Trump campaign on foreign issues, especially Russia. Numerous conservatives have accused the FBI of corruptly spying on the Trump campaign, saying that the warrant was a fraud, and the spying was a conspiracy to blah blah blah.

So a bunch of congressmen demanded a copy of the warrant, which was supplied with large redactions. Not surprising for a secret warrant really. That's the idea of secrets--you don't show them around. I love the picture of one page of the warrant with its redactions.

Carter Page, among others, claims that the warrant is an outrage against his rights as an American. Such warrants are supposed to be granted only on the basis of probable cause, whatever that means. OK, I'll look up what it means. Oh dear, it's rather broad. However, Page going to Moscow, reportedly seeing Russian intelligence agents, fulminating against sanctions on Russia while working on the Trump campaign, maybe there's enough probable cause there.

According to a fancy lawyer writing for the Brennan Center:


"... we cannot imagine the FBI that we know after decades of combined experience would ignore the evidence that was presented to them and decline to seek a warrant for Carter Page when it did. In fact, if the FBI had failed to investigate such allegations, we (and the American people) would’ve been entitled to find them derelict in carrying out their duties."

I definitely don't have experience in how much foreign contact is fine and how much is worrying. I have to depend on others to make that call in an unbiased way. If it turns out that Carter Page wasn't peddling influence to the Russians, that's good. However, maybe he was just careful not to leave an electronic trail. So, really, I'll never know if he's innocent, only if he's guilty and the evidence comes out. That's asymetry for you. 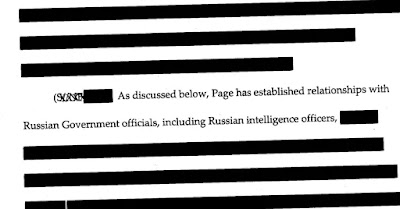 Posted by ModeratePoli at 9:51 PM