Travel ban ruling. A careful look at the travel ban (from some Muslim majority nations) and the issues involved. The Supreme Court decision and the dissent are haunted by the decision in the 1940s to intern Japanese-Americans. None of the justices want to make a mistake like that again. But there are other interesting issues, like whether waivers are being granted to those with clearly legitimate needs to visit the US. Definitely eye-opening and different from the usual partisan screamfest.

A history of the politics of Supreme Court nominations. A clear, easy read. I prefer the times when competence was the issue. However, the Bork nomination and anger over it eroded that. This prompted me to look into Bork again, and I found this strong statement of opposition to Bork--that he had no problem with discrimination and segregation as a personal choice of a business owner. Nor did he have any sympathy for the accidentally pregnant. It was the right thing to defeat this nomination. (I've written about before about the history of the Supreme Court.)

Poor standards at Fox News again. This time, Fox reported, Trump tweeted and both were wrong. This isn't actually news, but someone should keep score of how bad news orgs are.

Inside look at land management issue. This is a rare topic, but important for the future. Good choices on land management are a boon. Bad choices are a blight. I've seen it first hand on the Outer Banks of North Carolina.

Why is congress such a circus? There's actually an answer to that question. Gods be praised, and count me surprised. The answer is--messaging is still very important in Congress, but policy isn't. The number of pragmatic policy staff have been greatly reduced, but not the 'communications' people.

The latest winner in Syria... Is Israel. Read about the power plays between Israel, the US, Syria, Russia, and Iran. Fascinating. Seems coherent and solid to me. Will I still think so in a few years? 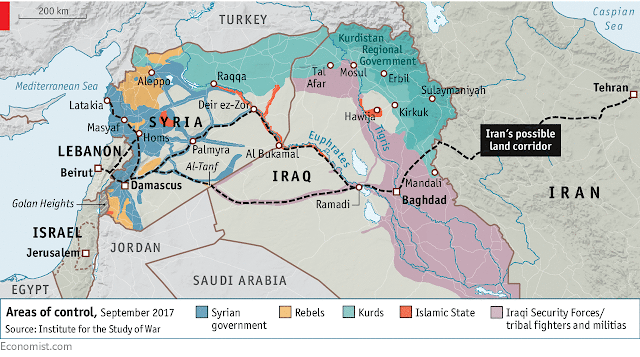 Posted by ModeratePoli at 10:41 PM