Peter Strzok is the reviled FBI agent to wrote all sorts of nasty texts about Trump using his official FBI phone. The texts were sent to an FBI colleague with whom he was having an affair, an interesting bit of spice but oh-so-common among Congressman, presidents, and assorted Washington folk.

Supposedly Strzok may have been in deep with the deep state that concocted the Russian interference hoax as part of a planned coup. That's according to the far-right conspiracy theorists, who really seem to believe this. (Sources 1, 2, 3.) And Fox News got heavily involved, showing that it isn't much different from the far-right conspiracy theorists. Everyone is now Alex Jones school-shootings-are-staged crazy.

This past Thursday, members of the House grilled Peter Strzok. It was a circus, with too many insane moments for complete discussion here. I'll pull out a couple bits I found significant.

Trey Gowdy, a one-man Jekyll-and-Hyde combo who can't decide whether to go full honest or full partisan, decided to grill Strzok about this text complaining about what an idiot Trump is. For some reason, Gowdy wants to take these off-hand texts as completely serious. (Scroll down here for the testimony.) Absurdly, he questions Strzok on what he meant when Strzok wrote the Clinton should win 100 million to zero. He refused to accept the answer that it was hyperbole, despite that it obviously was hyperbole. How does that make sense? How is that constructive at all as questioning?

Gowdy seems to have a special hatred for Strzok. Does Gowdy not know how people talk about Trump, and how Strzok is fairly representative? On the other hand, Gowdy can be realistic, like supporting the Mueller investigation and pointing out that there is no rationale for impeaching Rosenstein. This is a head-scratcher, but that's how Gowdy has been for a long time.

Much more puzzling was Louie Gohmert's questioning. Gohmert appeared to be reading notes about the Inspector General for the intelligence community (ICIG) sending an investigator to verbally tell Strzok that Clinton's server had been hacked, something strange (an anomaly) installed, and emails copied and sent to a foreign account. Strzok remembered meeting with the investigator, but nothing else. Gohmert in incensed. How could such a finding be ignored by the FBI? Well, that's a good question. No one other than Gohmert seems to have information about this accusation. I have to wonder, was there a written report? Who was it sent to? Why didn't Horowitz, the Inspector General for the DOJ, mention it? And wasn't Hillary's server stored in some facility and wiped? How would an investigator find 'an anomaly' on it if that's true?

Gohmert seems to be the only person telling this story, which is a bit bizarre. I have to wonder if Gohmert got punked with a fabricated story using a few actual details, like the name of the IC Inspector General. So far, no reporters have followed up. But it can't be hard to call up the IC Inspector General and ask him about the server. I hope I get to read about it. It would be delicious if my theory was confirmed. I'll have to eat dirt if I'm completely wrong and there is an inspector's report to that effect. 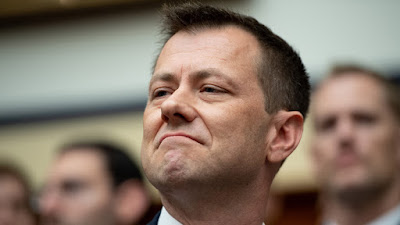 Posted by ModeratePoli at 9:33 PM