Christie is a big target

One day after his reelection by a 60-38% margin, lots of conservatives are sniping at Christie. Christie isn't a doctrinaire conservative, much less a Tea Party patriot who lives and dies by principle. But the targeting is surprisingly aggressive.

Here's a line that you can say about any politician (just substitute a name): "Christie is only out for Christie." Christie isn't a strict GOP partisan, so that makes him "self-serving." Do the people who criticize Christie for that also criticize Ted Cruz or Jim DeMint for behaving the same way--not supporting all their fellow Republicans? No, I don't think they are tarred the same way.

Yet I'm pretty sure this is the inside meme about Christie among the Tea Party. It leaked nationally when Rand Paul said Christie was all "gimme, gimme, gimme" over Sandy disaster aid. Now I'm seeing it again in the comments sections of conservative sites.

This idea that Christie is a self-promoting politician is a convenient ad hominem attack that allows people to dismiss him. There will always be plenty of evidence to support this charge. I don't know how whether the charge will resonate with others--Christie seemed to have put his state first when Sandy hit rather than toeing the party line. Ironically, the same incident is used as evidence that he puts himself first. Good luck finding the objective truth in that argument.

Meanwhile, Marco Rubio is reminding his party not to get too excited about Christie: "...some of these races don't apply to future races." So Rubio demonstrates again that's he's the biggest weasel lining up for the 2016 presidential primary. (Or is that just a different flavor of ad hominem attack that's hard to refute.)

Establishment Republicans, often denoted as GOPe, aren't trumpeting Christie as much as the Tea Party is trying to tear him down. Michael Barone sees lessons for both the GOP and Dems in these elections. Provocation, especially on social issues, leads to losses. Dems can't count on the minority vote because Christie won 51% of Hispanics in New Jersey.

One of the HotAir writers wants the readers to see that Christie has a winning formula. However, the commenters mostly push back. Rich Lowry of National Review (quasi-establishment) sees some potential in Christie, but also some problems:


"...he offers a different kind of politics that can potentially unlock the presidency after a period of national futility for his party...
What Clinton had that Christie evidently lacks is a well-thought-out approach to his party’s predicament ...
Christie’s potential is in matching that Everyman appeal with substance. He could set out to make himself a Republican by and for the middle class in a substantive and stylistic departure for the contemporary party. -- Rich Lowry writing in Politico

Who Can Win vs. I Don't Care

The huge difference is how these groups see Christie is that one group (GOPe) sees Christie as a presidential contender who will bring in a lot a votes and won't be just a marginal winner. They are concerned with the mechanics of putting together enough votes to resist the Dems' demographic advantage.

The Tea Party group doesn't talk about demographics at all. They don't worry whether they can carry enough swing states. They are so sure a Tea Party candidate will win that they don't question it at all. To me, that's amazing--that you could be so sure that you wouldn't consider the electability of your nominee. Of course they've been burned on electability before. McCain was the most electable in 2008, though really he had only a ghost of a chance. Maybe they should have gone for the most conservative candidate that year, which was ... Romney. They definitely got burned in 2012. The Tea Party is pledging not to get burned in 2016. Well, we'll see. I'm not convinced that the Tea Party is the majority in the GOP, but perhaps we'll find out in 2016.

I know it's still too early to predict the 2016 primary race, but everyone is talking about it. Funny, the 2008 election didn't start in 2005, but the 2016 election started quite early in 2013. I chalk that up to the cold war in the GOP, which is getting hotter all the time.

Christie looks like the best hope for the GOPe even if a midwestern governor like Mitch Daniels or Scott Walker jumps into the race. Daniels looks like an older establishment Republican (yawn) and Walker is nerdly and possesses less charisma than Jindal. The establishment likes to coalesce around a candidate early, but that may not happen because Christie isn't exactly the GOP mainstream. Yes, it is too early to say. 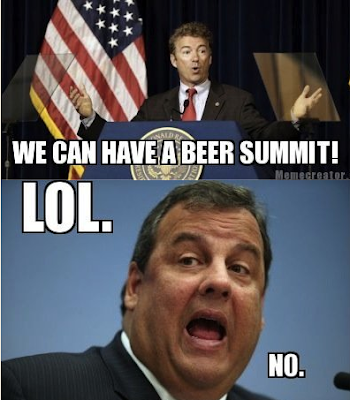 Posted by ModeratePoli at 6:17 PM