There was a conservative dinner in Iowa that garnered some major guests. Mike Lee seems to learned from experience that he can't bring down Obamacare in the current configuration of government. So, instead of doubling down on that failed strategy, he's working on new ideas. They seem fuzzy to me right now, but at least he's in the correct sphere--one that looks at reality rather than denying it. He's also thinking strategically:


"The senator from Utah noted that there is a gaping hole in the middle of the Republican Party today, and offered a solution on how to fill it."

I'm so glad to hear someone say this. Mike Lee is going to be worth watching. I hope he had bridge that gaping hole.

Sarah Palin, on the other hand, is basically a cheerleader with no brain for policy. Rah, rah! I've got no tolerance for an empty-headed politician, so I wish Palin was over already. She's an idiot, and she's steadfastly remaining one. Enough already! 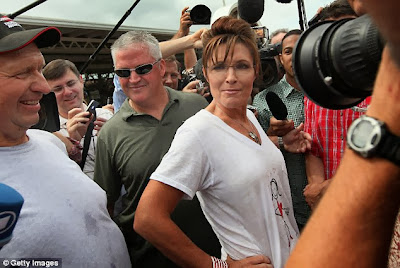 Come on, you're not serious.
Image: dailymail.co.uk