Chamberlain capitulates to the mullahs

I was quite happy to hear that Iran, the US, and five other countries had come to a deal to stop the Iranian nuclear weapons program. It seems like a win-win situation to me:

My biggest worry is that it could be a whitewash. Iran is eager for looser sanctions, but will it continue its program and give the world a nuclear surprise a la Pakistan or North Korea?

When I start my reading with National Review, I find out that this is the biggest mistake since blah, blah, blah, something with Hitler. Sorry, as everyone knows, it's the Munich accords with Hitler, which allowed Hitler to take over a large piece of Czechoslovakia.

Wow, if John Kerry and Obama, not to mention the other countries, have done a Munich-like agreement, why would they have big announcements? Maybe I should find out what's in this horrible agreement. So I google, and find this handy list of the provisions from CNN. It's too long to repeat, but it seems pretty good.

Iran's going to de-enrich its 20% enriched uranium and allow daily inspections. Most of the sanctions stay in place while the enforcer nations see if Iran fulfills its part of the bargain. As a carrot, there is some easing of sanctions. That sounds really good!!! ... as well it should because the list is taken from the White House press release.

Nonetheless, National Review is sorely lacking in its own list of what's wrong with the deal. In the list wars, the White House has won hands-down. That may not be a good way to judge, but the WH provided a damn good list and NRO provided article after article of warmed-over Hitler comparisons. Fourteen articles in all, and no list! Come on, tell me some solid reasons why this is a repeat of the accord that gave free rein to Hitler.

I didn't find a strong critique of the deal, so I'm left hoping that it's as good as it sounds. But it's not just me. One commenter reports that the Israeli stock market is soaring! WAY TO GO!!!!

What I didn't realize that the sanctions weren't meant to convince Iran to give up nuclear weapons programs. Instead, they were meant to collapse the Iranian government:


"Realists knew that the sanctions were good for only one purpose: to weaken the regime to the point where it would collapse or be overthrown."--National Review

Stupid me. Regime change was so good in Iraq and Afghanistan that we want it for the even more populous country of Iran. What a plan! That won't destabilize the mideast at all. No wonder the Israeli stock market is cheering.

[Apology: I didn't mean to turn this post into a rant. I honestly wanted to find out more about this agreement. Something in me got wound up by those 14 stories in NRO. I didn't get to chill out because among the Google top news for the US, the Iran story didn't even make an appearance.] 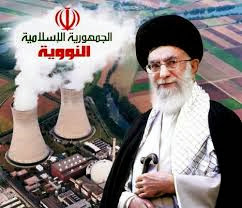 Extras. A more balanced piece in National Review. It reports that Iran's concessions will set its enrichment program back only a few months, with some checkable details. Fareed Zakaria tries to sort it out. George Will declares that Iran will get the bomb for sure now.

Some typical "Munich" rhetoric with an ironic kicker:


"There is not a good record, from Philip of Macedon to Hitler to Stalin in the 1940s to Carter and the Soviets in the 1970s to radical Islamists in the 1990s, of expecting authoritarians and thugs to listen to reason, cool their aggression, and appreciate democracies’ sober and judicious appeal to logic — once they sense in the West greater eagerness to announce new, rather than to enforce old, agreements."--National Review

But wait, didn't the Soviets do just that, cool their aggression, and change their ways without a massive war? Nah, it couldn't ever work that way again. 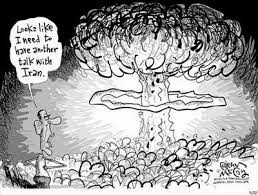 Posted by ModeratePoli at 9:03 PM

This is the only guy worth listening to on CNN and I usually trust his Middle East analysis. http://globalpublicsquare.blogs.cnn.com/2013/11/24/what-critics-are-getting-wrong-about-the-iran-deal/

@rs, I already had that link, which is to Fareed Zakaria. I don't feel on firm ground with respect to international affairs because I don't travel nearly enough to get an on-the-ground sense.