One thing I learned: a case against ACA

I'm not as open to different ideas as I would like to be. It seems to me that most people who are firmly against ACA fell into one of more of these categories:

I found another category, or maybe I just started hearing the argument: fiscal conservatives who don't trust the finances of the program.


"Obamacare is basically just another entitlement. It has no solid foundation to pay for it despite all the rhetoric. I'm not 100% opposed to entitlements per se, but we do a pizz poor job of administering them - so in my view we don't need another one." -- National Review commenter

This is a strong argument. If I take the argument sentence by sentence, it holds up quite well:

I support universal health coverage for a variety of reasons, but I'm also aware that it could be a failure. I want to try it anyhow for the many benefits, which I already have as a Massachusetts resident. My empathy for people in need outweighs my worries. But for many people, the scale falls the other way.

They have good reasons for their opinions, perhaps stronger than mine, yet I still don't agree. It's not that I'm giving in to illogical motives. It's because of the mystery of how some values take precedence over others. 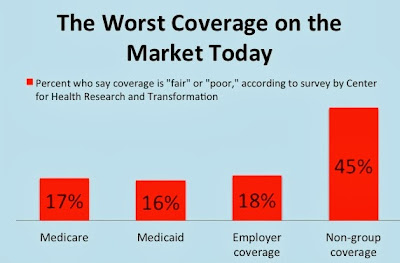 Posted by ModeratePoli at 11:18 PM

The argument doesn't hold up nearly as well as you give it credit, especially since the same set of arguments work against the status quo prior to ACA. To wit:

Another entitlement --check. Anyone can walk into an emergency room and receive critical care. That's the entitlement we as a society and country have decided everyone should receive.

No solid foundation to pay for it--just as it is now. Hospitals and municipalities now pick up the cost of care for indigent or uninsured, passing the costs to everyone else via higher premiums or taxes, even if that ends up costing a lot more in the long run.

Pizz poor job of administering them--check. I don't think anyone ever held out the private health insurance business as a paragon of efficiency and user-friendliness. On the other hand, Medicare spends a much lower portion of its total cost on administration than any private insurer.

So unless we are ready to decide the people don't deserve medical care they can't afford -- which is just about everybody except the super-rich -- or can't afford to purchase insurance to cover their costs, we're going to have to come up with a way to pay for that entitlement. Secretly, I suspect that people making this supposedly strong argument are simply looking for an excuse to deny medical care to poor people, but don't want to come right out and say so for political reasons. It's just a dressed-up version of the makers vs. takers argument, designed to appeal to reasonable people like you, MP.

So your counterargument is that the same argument could be have been used earlier, but didn't prevail? Acceptance of an entitlement a couple decades ago doesn't entail acceptance of a larger entitlement now.

Do you have a direct objection to the argument as it was applied, to ACA? That's the issue, not what other junk you can try to throw into discussion.

I'm not making a counterargument. I'm directly attacking the validity of the affirmative argument as used against the ACA. I'm saying that the existence of all of those arguments prior to ACA argues in favor of ACA, attempting to make the issues cited less intrusive, not more so.

ACA creates a better way to deal with how our society has addresses the healthcare needs of our population. It creates a more solid foundation to pay for it (broadening participation in the insurance pool), and standardizes policy terms to minimize risk and uncertainty, thus making it easer to administer that risk as a whole.

As for the "another entitlement" canard, the facts don't agree with the 'another' part since the option was unreimbursed care for the indigent or freeloader, since public providers could not deny expensive emergency room care. At most, one entitlement is exchanged for another.

@dangerous, I'm not sure how you can argue that ACA isn't a bigger entitlement than the statutory right to receive emergency medical care. Or maybe I don't understand your argument. If the argument is that ACA is a big new entitlement, are you saying it's not? Are you saying it's a smaller entitlement than the right to emergency medical care? I don't know if it's important to nail down what you're saying, or whether you should just let it go. Your choice.