Even if you're against the general public owning guns, you probably don't want the rules enforced this way. A student protected himself against an intruder by scaring the guy off with a pistol. The student, who lived in an off-campus apartment, was licensed and trained to handle the gun. Good work, right?

Not according to the university powers-that-be. The weapons were seized in a 2am raid mounted against the partying sleeping student. So much for the expectation of privacy and respect for the individual in his possessions. The university, who was his landlord, enforced its no-guns-for-renters policy in the middle of the night. One only wonders what they would have done if the student needed to fire in self-defense. 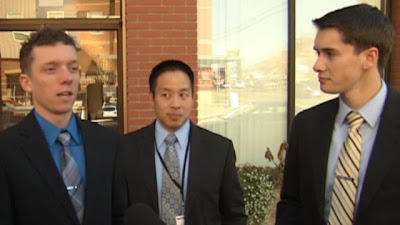 Rulebreakers in suits and lawyered up
Image: cnn.com
Posted by ModeratePoli at 3:03 PM