Sean Hannity doesn't usually tout anything associated with Eric Holder. A quick search shows that Holder doing something with 'the return of the race card,' Holder is 'trying to survive another major scandal,' a Hannity guest call Holder 'the chief activist,' etc. etc.

So how can Hannity being saying anything good about Holder? Only to slam someone else--in this case a low-information protester from Ferguson, Missouri.

It's no surprise that Hannity can find a black protester who blames the police for the shooting of two officers at a protest this week. Most news programs are actually carefully stage-managed events. The protester being interviewed had almost certainly been pre-interviewed, so Hannity and his producers knew that he was going to deny the existence of the evidence. Hannity knew he would get to tell this black protester that another black man, Eric Holder, found that  testimony Michael Brown had his hands raised wasn't supported by the physical evidence (video starting at the 2:18 mark).

So Hannity gets to punk the protester using evidence. How frequently does Fox News use evidence instead of ignoring it, I have to wonder. Oh, the irony.

Sadly, there is no shortage of people who will claim all sorts of things, even in the face of strong evidence to the contrary. I could detail lies from Hannity or other sorts of manipulations, but there is no need. Anyone can search "hannity lies" for themselves easily enough.

Too bad Hannity brings on an unprepared protester instead of Ta-Nehishi Coates. Now that would be worth seeing. 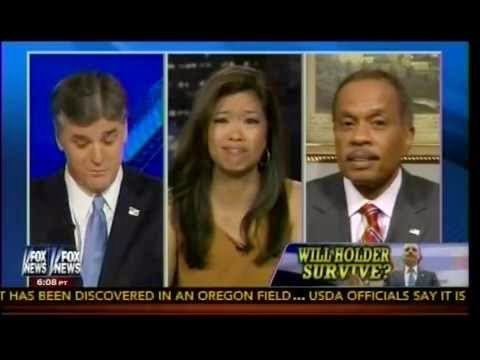 Thank God Holder survived when we needed him.
Image: wn.com


Extras. Many black commenters not accepting the evidence here. Bad job, good pay--being the 'liberal balance' on Hannity. It contains a more typical Holder moment--where he's compared to the lawyer for the Corleone family.

Posted by ModeratePoli at 8:34 PM