I'm catching up on the combo-blog Political Animal. This one is worth a look. Glenn Beck and Grover Norquist are fighting over who will have more influence on the NRA. Norquist is suspect because he's a closet Mooslim married to a middle eastern woman.

Glenn Beck was able to mobilize hundreds of people to call the NRA. That's a scary thought, though not exactly surprising considering the demonstrations that the Tea Party mounted in its first year. Glenn Beck followers are nothing if not sheep-like. He's even had to ask conservative PACs to please stop fundraising because his mother won't stop giving. Multiply that by enough brainless, comfortably retired, conservative couch potatoes, and it's easy to imagine the NRA swamped with phone calls.

It is scary how many people Beck can mobilize, but then I remembered that Election Day is a whole different ballgame. It doesn't matter if Beck can mobilize hundreds or thousands if we're expecting over 100 million to vote. When it comes to Election Day, Beck doesn't have a disproportionate say. 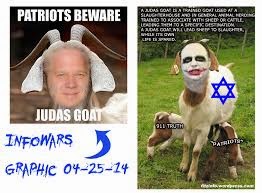 Some of the sheep have time for Photoshop too. More scary or less scary?
Image: fitzinfo.wordpress.com
Posted by ModeratePoli at 11:24 PM