The Iran negotiations shouldn't be a partisan football

The worst part of our hyper-partisan environment is how too many issues get sucked into the partisan vortex. Also, policy issues end up having a preset Democratic side and Republican side, instead of having good policy thrashed out through passionate discussion.

The Iranian negotiations are definitely a terribly important issue since it involves an aggressive country that has been moving toward developing nuclear weapons. Iran may not be as aggressive as Iraq or North Korea, but they are supporting armies in other middle eastern countries, so we should worry about them more than we would about, say, Sweden.

According to the Dems, we can trust Obama to make a reasonable deal with the Iranians. According to the GOPers, Obama is either purposely or foolishly walking into a terrible deal that will allow the Iranians to build a bomb and become a truly frightening bully in the Mideast.

I actually agree somewhat with the GOPers. We shouldn't simply 'trust' the president to deliver a good deal. Leaders sometimes get taken for a ride because they want to deliver some sort of deal. We should have a healthy skepticism about the deal. If one is reached, we should look at it carefully before supporting it (though lack of public support won't necessarily derail it). Does Iran show clearly enough that it won't be pursuing nuclear arms? If it holds on to enrichment capability, is it too much, or is it a token for national pride? I want to know this about any potential agreement.

A good thing about the Netanyahu speech is that serious people are talking about the real risks of this agreement. What if Iran decides to build a nuclear weapon, and now has the chance to do it more easily because it bargained in bad faith and got away with it? How much enrichment capability is too much?

That last one is a fascinating question when you unpack it. It now seems that we might have some tolerance for Iranian enrichment capability--it's no longer a zero-tolerance policy. Netanyahu talked about a 'ten year breakout' situation, where Iran would have to run its centrifuges for 10 years in order to make enough enriched uranium to make one bomb. Other news leaks suggest a 1-year breakout period.

I wish Iran would consider giving up enrichment capability altogether. However, there is a good reason why it won't. It's not an easy deal for a country that doesn't want to be dependent on others for energy resources. Also, there is national pride--as a proud nation, we should understand that too. However, since Iran has ruled out giving up all enrichment capabilities, how do we know if they are negotiating in good faith, or if their intentions are to renege as soon as sanctions have eased enough?

I certainly don't know how we can tell, and I'm not sure the negotiators can tell either. This is where partisan assumptions can jump in. Dems tend to assume that the Iranians are planning to honor their word, and Republicans tend to assume that Iran is lying and negotiating in bad faith. Dems assume we can come to a satisfactory agreement, and Republicans assume Obama is stupid or treasonous for even talking with the Iranians. Neither of these assumptions is helpful in these negotiations, where we do have to be very wary.


The only way to be sure

I hope for a deal. Our experience with decades-long sanctions on Iraq and our eventual invasion isn't one I'd like to repeat with Iran. I see a deal as the best way to encourage Iran to engage with the rest of the world rather than fight with it. But there isn't certainly it will work. Continued sanctions wouldn't bring certainty either. 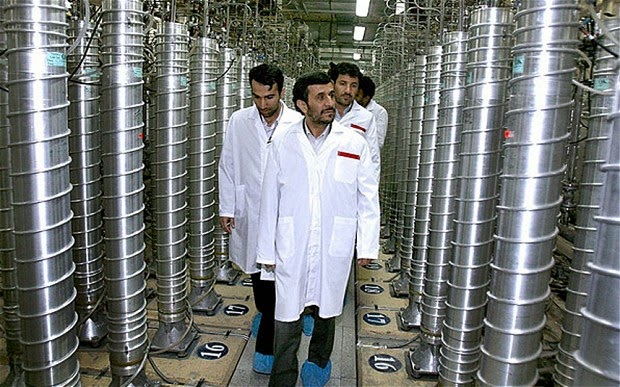 Postponed update April 2015: What are the alternatives to negotiations and could they work?
Posted by ModeratePoli at 7:54 PM