Ta-Nehishi Coates, perhaps the pre-eminent black columnist in the US, writes very clearly that Darren Wilson, who shot Mike Brown in Ferguson, Missouri, was innocent of a wanton crime:


"The investigation concluded that physical evidence and witness statements corroborated Wilson's claim that Michael Brown reached into the car and struck the officer... The investigation concluded that there was no evidence to contradict Wilson's claim that Brown reached for his gun... That he did not shoot Brown as he was running away. That Brown did stop and turn toward Wilson. That in those next moments 'several witnesses stated that Brown appeared to pose a physical threat to Wilson.' "

Coates doesn't shy away from declaring this as fact, which is good because honest people should deal honestly with facts. They need to draw their opinions based on fact, not on presupposition and bias. Coates seems to have no trouble accepting these facts now that they have been thoroughly investigated. I don't know how late Coates was in coming to accept these facts, which I discerned back in November, or perhaps earlier. Amid all the "Hands up" protests, there was a steady drip of evidence pointing toward the conclusion that Mike Brown had attacked the officer, and not the other way around.

I'm not going to look back at Coates' columns to see if he turned a corner and when. This isn't a game of gotcha to me. Instead, this was a heart-breaking incident where all the players had feet of clay. This police officer was innocent of willfully mistreating this young black man, but that wasn't true for a significant portion of the police force. The police were oppressive to the black citizens, and the anger that erupted was in proportion to that oppression.

I can easily understand the growing anger if I was being targeted for traffic stops, searches on flimsy grounds, and multiple fines for tiny infractions. If I thought I'd have to worry about being shot and killed, that's too much to bear. So I have sympathy for the protesters--the ones who actually lived in the area and were subject to the oppression. I hope this can and will change now.

To the hypesters, race-baiters, knee-jerk partisans, arsonists, and hooligans, I hope you have no incident to flock around for a very long time. You turn misery into your sport, which is just sickening. Please, go hide in some holes while the good people of this country work to heal and make this better. 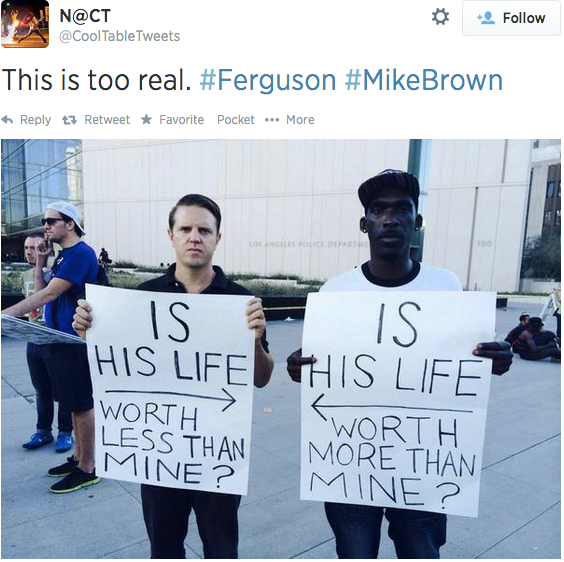 Posted by ModeratePoli at 2:27 PM