Following the will of the people ... into stupidity

How terrible was it--that the will of the people didn't reign? It's actually part of the design of most governments. Representative government is intended to do something other than govern by just majority sentiment. Instead, representatives are chosen who are, hopefully, more thoughtful, wise, and informed than the average voter. Though voters aren't required to vote for someone better than average, the competition makes it likely that the winners will be better.

So we entrust the power into the hands of our chosen representatives, and sometimes they don't do what we want them to. That may happen because what the people want is foolish or impractical or downright impossible. For example, Americans want very good government services in the form of healthcare, a strong military, good schools, good roads, etc. But we also want low taxes.

It doesn't take a rocket scientist or Nobel prizewinner to realize that those goals are in direct conflict. So our representatives have to sort out the conflict within what We the People want. The results may be disappointing, but they may also the best possible outcome given all the constraints. More likely, the results are somewhat less than optimal due to compromises/bribes made to get enough votes, but better than a solution straight out of a Gallup poll. 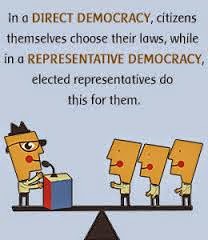 Extra. This column was inspired by this post, which was a reminder of how Americans love the benefits and deride the costs, whether it's Medicare or ACA. It's not a new observation, but timely.
Posted by ModeratePoli at 7:59 PM

Email ThisBlogThis!Share to TwitterShare to FacebookShare to Pinterest
Labels: democracy

Actually, one could argue that Congress did with will of the people with ACA because, when questioned on various key provisions of the law, public support was overwhelming.

What the opposition did was reframe those provisions as a whole as something that people oppose, pressed that message, and were able to get the media and the public to adopt that view.

Sometimes elected representatives have to take poll results seriously. Sometimes they have to act based on election results. Other times it's wiser to let things settle out over the long term, even if it means that the opposition gets a victory in the short term. ACA is an example of that, but if a policymaker attempting to serve the interests of the public against their perceived wishes wants to produce that long-term favorable result, they have to sell sell sell as hard or harder than their opposition or risk the short-term unwise reaction from the public prevailing -- to the benefit of the opposition.