Is that what's happening now? Everyone hit the Off button one day after the debt ceiling was passed. Now the political supercomputer is starting back up, but with some strange, unexpected new programming whirring around inside.


The perception of how Washington handled the debt ceiling negotiation led to an immediate collapse of confidence in government and all the major players, including President Obama and Republicans in Congress....

We are entering a new phase of the American political dialogue that has been irrevocably shifted in a way that will prove difficult to predict.

Historically, though, this type of deep voter anger, unease, and economic pessimism leads to unstable and unpredictable political outcomes.

This is from the report by a Republican pollster. The collapse in confidence is both political and economic, and they have the potential to create a feedback loop that resembles a tornado. It's the secret knowledge that explains the odd behavior of Eric Cantor.

To show how different the political atmosphere is this week, compare it to last week's admittedly thin political news: the Repubs were floating some balloons about letting the 2% Social Security payroll tax cut lapse. Jim DeMint was blaming the nefarious media for the Tea Party's loss in standing. Same old, same old.

Now, Eric Cantor is trying to be cordial and welcoming. Take that as a weather warning, and check frequently for updates. 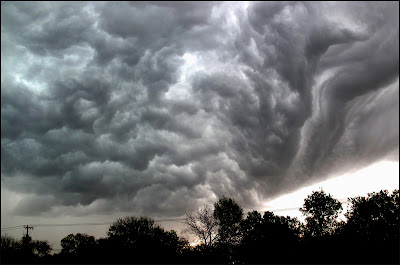 Posted by ModeratePoli at 2:04 PM