Historically, the US has a progressive income tax rate structure. Top rates on income were at one time 90%, and were 70% for many years. That sounds absurdly high now. I can't imagine why elected officials thought it was fair to take 2/3 of what you earned and leave you with less than 1/3 (except during WWII, when that rate of taxation was preferable to giving "Heil Hitler" salutes).

Now, after three decades of flattening tax brackets and increasing deductions and credits, our tax structures deserve a rethink. But the most important reason to change our tax structure is that it doesn't DO THE JOB. It doesn't fully pay for our government expenses. With our deficit and debt problems, I have no doubt that taxes have to and will go up, which shows I'm a realist and not a "conservative" Republican.

The thought of increasing taxes panics a lot of elected officials. (The exception is my local government. We have step increases almost every year, and propositions for further increases every four or five years. It's curious how easily these increases are accepted. However, those who don't like the tax rises can vote with their feet and move a few miles to a more suitable tax level.)

End of digression, back to panicky pols facing the prospect of increasing taxes. Most people would like to shelter themselves as much as possible from tax increases and put the burden on other folks. This natural reaction is counterproductive, because no one other than Bill Gates Sr. and Warren Buffett are volunteering to pay more taxes.

These are the usual, stereotyped positions on taxation:
It's a giant high-school cafeteria food fight. It's already started, but isn't anywhere near its peak. Stay tuned. 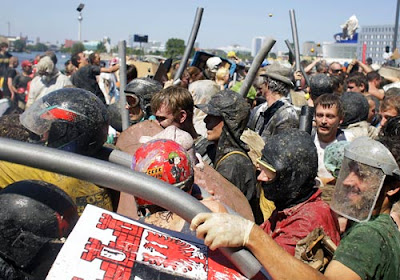 Posted by ModeratePoli at 3:27 PM