Despite the [hollow] protests on each political side, the sequester is very likely to occur. That's because the sequester isn't going to be that painful, and there's no better deal on the horizon that can pass the House and Senate.

The GOP may complain about the deep cuts to defense, but they're on the record for wanting even deeper spending cuts. If all those cuts came out of entitlement programs, the GOP would actually be in more trouble. A lot of seniors would be furious over cuts in Social Security and Medicare that became noticeable, maybe even painful. Having a balanced sequester, for all the GOP bluster, is a boon to the GOP.

The Dems also complain, but about the broader effect of the cuts. It's bad for defense, they say (but most liberals are happy to give defense a good trim), but look at what it will do to food inspectors and air traffic controllers and first responders! Excuse me, but I think almost all first responders are paid for at the state and local level, so a 2.3%, 4%, 7% or whatever reduction at the federal level is minimal. But we do like all those spiffy uniforms at our press events.

Dems are pressing for more tax increases, but the GOP isn't going to give them that. So the Dem proposal is dead on arrival. The GOP wants to cut everything but defense, but that's dead on arrival for non-blue-dog Dems.

One thing to remember is that this sequester was the best deal available, in that each side got what it really wanted back when it was negotiated in August 2011. The GOP got no tax increases. That is still the top priority for them, so that leaves little room for them to strike a new deal. The Dems caved on no new revenue (and just had to be patient for the Bush tax cuts to expire), but they got to direct where the cuts occurred. To Dems, it's still the best mix of cuts. They have no incentive to let the GOP change that mix.

By the way, the sequester doesn't even cut spending. It just slows the increase in spending. Per the CBO, the spending for 2012 was $3.538 trillion. For 2013, it's projected to be $3.553 trillion with the effect of the sequester. So if we're cutting the budget in some places, it must be growing like weeds somewhere else. Maybe that indicates we have a big job to do on that "somewhere else." That's sure to be fun with this Congress. 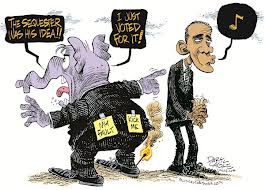 A nascent thought - the one-day-a-week furlough for civilian defense workers will keep those workers off the unemployment rolls. That's a good move now, but will it establish a 4-day work week for federal workers?

GOP disarray over the sequester:
Up Next: Look for a post soon on the next crisis point - the next Continuing Resolution, which we need by April 1 March 27. 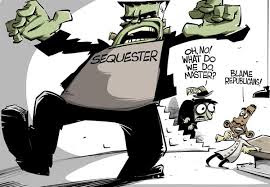