Merry-go-round of irony and lies 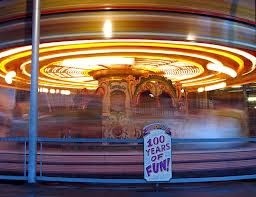 Update 2/20/13. The ride is still spinning. The inadvertent source of the rumor has been self-identified. He emailed a question to an unnamed "Republican aide" and less than 24 hours later it morphed into a headline at Breitbart.com. Ben Shapiro at Breitbart continues to practice "do what I say, not what I do" by claiming that [HORRORS!!!] the source, reporter Dan Friedman, knew he was wrong before he published his piece claiming to be the unwitting source. Shapiro, are you saying that's wrong? My heavens, I never would have known that from your example.  Just to say it again, the conservative media can gripe all it wants about the MSM, but until it follows more of the same rules of good journalistic practice, it won't gain credibility. As this case illustrates, again...
Posted by ModeratePoli at 12:32 AM