Checking up on media watchdogs

As a little project a couple weeks ago, I compared conservative media watchdogs with liberal media watchdogs. This wasn't an exhaustive review because I don't have the time or the constitution, so I looked at the most well-known sites.

Media Research Center/NewsBusters critique the liberal bent of mainstream outlets like CNN, NBC, ABC, CBS, and the biggest target, MSNBC.The general complaints that MRC makes is that the MSM is biased in its coverage, highlighting negatives of the GOP/conservatives and burying the negatives on the Obama/Democrats/liberals. Benghazi is a specific example, with little time spent holding the administration up to a penetrating examination.

It's easy to attack the amount of coverage of an issue because there isn't going to be clear-cut answer. It's always a judgment call whether to give the news story 30 seconds or 5 minutes, and the choice can always be attacked. However, when does coverage become overkill or beating a dead horse? My personal opinion is that the conservative media inflated the errors in Benghazi, especially the error identifying the type of attack on the consulate. Conservative media and GOP congressional leaders ignored an important piece of context (the riots going on in Egypt), and beat the drum over supposed lies, which wereunderstandable misperceptions and were corrected.

However, like police wearing down a suspect, the GOP won't stop when they have the administration in their sights. Without doubt, a Dem-controlled house has done the same to a GOP president. It would be great if this particular brand of bad behavior ended. It won't, but luckily the majority of the public doesn't buy it no matter which party is using the tactic.

Many of the other posts on Media Research Center/NewsBusters are shallow boosterism (George Will/Hannity/O'Reilly schools so-and-so) or about picayune errors perpetrated against conservative heroes by mainstream reporters who are assumed to be biased.

On the liberal side, Media Matters is somewhat better than these conservative counterparts, with less boosterism and less targeting of small fry. Often Media Matters typically points out what conservative commentators have said without elaboration. Occasionally they exhaustively run down a false conservative talking point to its origin, as with this Benghazi lie about real-time video of the attack. 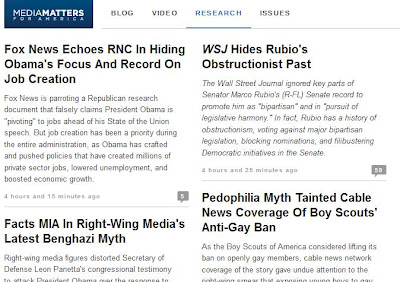 Repeating a non-fact is an equal opportunity mistake, but I see it more among the conservative media. A recent example is the use of a hypothetical example in an IRS publication--it was inflated into an announcement that the Obama administration knows that health insurance will cost $20K a year. Then the false info spread around to many conservative sites.

I like watchdogs that show you 'who said what,' and then let the overt misstatements speak for themselves. I also like watchdogs who point out the patterns of bias. Most of all, I want links so I can check these stories myself. Both Media Matters and NewsBusters do well on that score.

I wish I could find a site that watched the conservative, mainstream, and (further) left media equally. But I'm not surprised such a site doesn't exist. Who could stand to do all that?

Posted by ModeratePoli at 9:24 PM