Grand political strategies of our times

Hat tip to commenter Anastasios for this topic. He wrote:


The GOP thinks that they are well-entrenched in the House and time will eventually bring them back into power with a well-timed recession or a major Dem mistake... The Dems acknowledge the mid-term danger but believe the GOP is slowly being throttled to death by demographic and social change, and that by about 2030 the left will have grown strong enough that the dreams of conservatives will be forever dead... In any case, neither side is trying to get things done, but to set agendas for when their expected futures come about. Whatever happens with the sequester and the budget is merely a blip in the sweep of the longer-term strategies they are pursuing... At this point I don't think either party finds it in their interest to minimize problems. [Emphasis added by MP.]

I don't know whose agenda the future will favor, but his point spurred me to think about grand political strategies of the recent past.

Back in 2001, or even earlier, Karl Rove envisioned a permanent Republican majority. That wasn't so long ago, but I still had to remind myself how it was supposed to come about. In a nutshell, the GOP would build a coalition of reliable, motivated supporters who would vote in larger percentages than the general public. This coalition was conservative (social, fiscal, and foreign policy) with pro-business and evangelicals being in the forefront.

Rove was very solicitous of the concerns of evangelical and conservative groups. But he also needed to make sure that the GOP blind-sided by bread-and-butter concerns, so education and Medicare were also on the radar. I recall reading the Medicare Part D came about because Rove didn't want the Dems to have the lack of medication coverage as an issue.

Of course this dream didn't survive the debacle of the Iraq war, with all lives lost, money borrowed and wasted, and arrogance that it was going well. The dream, already dead, was killed even deader by the financial crisis of 2008. No wonder I had to research to remind myself how 'the permanent Republican majority' was supposed to work.

If Dems can keep these voters coming to the polls, and sign up even more, they will have an electoral advantage. There's little the GOP is doing to woo these voters away, and they don't have an equivalent pool to tap. Lots of people think the GOP is screwed. So it would seem unless the Dems revert to being their own worst enemies through overreach.

I can't end this reflection without mentioning the Clinton strategy of triangulation. Under this strategy, Clinton negotiated a successful reform of welfare. He also avoided the fate of many old-line Democrats (turned out of office in 1994), and won reelection in 1996. Though it wasn't a 'grand' strategy, it worked well for Bill Clinton. Hillary wasn't so lucky or adept, and the Dems gave the nomination in 2008 to someone friendlier to the traditional left. 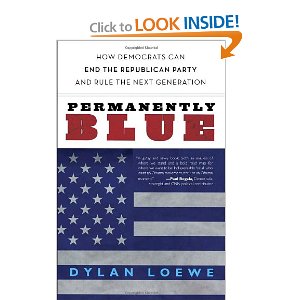 Posted by ModeratePoli at 8:37 PM

Demographics favor the Dems over the long term; there's little doubt about that. The only GOP counter is to roll up large margins in suburban areas. If they do, they win. If they don't they lose.

Living in the suburbs as I do, and in a swing area in a swing state as I do, I know that the primary consideration of the way most of my neighbors vote -- whether registered Dem, GOP or Ind is "enlightened seft interest". For a long time they leaned GOP and continued to do so until the questions turn national in scope. Then as the race becomes broader they tend more and more Dem since their interests align moreso with Dem policies.

Under Rove, the tax cut argument played exceptionally well in the 'burbs. So did the security argument. The result were large Congressional victories in 2002 and 2004. But people in the 'burbs lost trust -- rightly so -- in the GOP blather and reversed course hard.

What MP describes as "overreach" is partly right. In the case of 2010, however, it wasn't Dem overreach with healthcare that did them in. Most people in the burbs took a wait and see but I don't trust it attitude. The GOP played off of that to transfer blame to the Dems and the GOP still wants to play that game.

The GOP's only chance long term is to convince suburban voters that their self-interest lies with GOP economic policies. That strategy may still work but it's a tough one to sell until memories of Bush fade and they can blame any current economic malaise on the Dems.

I expect a stalemate for at least four years.

Good points, though I wonder whether the 'suburban' swing vote you talk about will also become less critical due to demographics changes.

To clarify my position, I don't think the idea of a national health insurance plan was overreach. The Dems executed it poorly, both in the House and in public relations. But the idea is sound. We have a lot of changes in health care coming our way, so this is just one iteration. Many improvements and disappointments yet to come!

One last comment, @Dangerous. Why do you choose four years as the timeframe for continued stalemate? Is it a gut feeling, or something else?

Suburban votes are the only large reliable swing voters that cannot be addressed as a block with an overriding community issue. Demographic changes will impact that, but the number of suburban voters continues to increase each cycle just as fast as, say, Hispanic voters does.

I agree the Dems screwed up their opportunity for a truly popular healthcare plan that lowered costs. The public option would have put the squeeze on private insurance companies to cut the fat -- including their high commissions and executive salaries -- by having government-sponsored plans in competition. But certain Dems nixed it in a way that the GOP would punish the offenders. But I'll withhold judgment pending the exchanges. If I can get cheaper decent coverage I'll be happy. They should have started it sooner; it was another give away to Dems in the pockets of large insurers in their states.

Four years of gridlock, minimum. The GOP has a lot of patience and no concern about the country. If things go bad -- they will blame the Dems and Obama. If things so good they will claim credit from having forced the sequester. No lose politics. We'll see if it works.

@Dangerous, thanks for answering my questions. (I rarely get answers on comment pages elsewhere.)

I'm not too worried about GOP claiming credit either way. It seems to me that the last election is decided on who had the less-worse plan. If that holds true for future elections, the winner is win by being either reasonable or less crazy, not based on blatant spin. Maybe Americans are becoming less susceptible to spin--WIN!