So the Senate didn't get to vote on the Chuck Hagel nomination for Defense secretary because of a filibuster by Republicans. But there's going to be a second vote later in February, and some additional GOP senators have indicated that they would no longer support a filibuster then. More boring Washington political theater--yawn.

If only I could filibuster the senators to prevent them from turning these nomination votes into stupid partisan exercises. To be clear, I think nominations hearings are a good idea and should be a time for searching questions. But the votes should be "yes" unless the nominee is unfit in some way.

Many conservatives seem to know how this will play out, and realize it's not worth the fight. Some, like Erick Erickson of RedState, are still hoping to defeat the nomination. Others foolishly believe that they have won some sort of victory in the recent vote--they are in for a nasty surprise called reality. But I bet these fools have been tumbled by reality before. 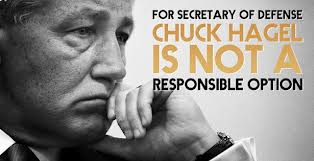 Still waiting for the evidence...
Image: theatlantic.com
Posted by ModeratePoli at 12:58 PM