I work in healthcare, so this topic is on my mind all the time. People go into hospitals where they are exposed to and infected by some very nasty bugs. These bugs, as biological things, evolve. However, they also do it very quickly because they have rapid reproduction rates. So they've been evolving to survive our arsenal of antibiotics, and they can be very hard to kill.

These infections, sometimes called superbugs, aren't new. I'm pretty sure that my mother-in-law died from one in 1998 (but I was a layman then). However, there has been a lot of attention to these superbugs in the past decade. That's part of the reason we have anti-bacterial wipes at the entrances to our supermarkets and anti-bacterial gel dispensers in hospitals.

I have a particular sensitivity on this issue, because healthcare personnel have been blamed for the spread of the superbugs. Supposedly we don't wash our hands often enough or well enough. Being among those personnel, I know that I don't wash as much as expected because I don't have time when I'm caring for over a dozen patients an hour. Telling me to "make time" assumes I can manufacture extra minutes, which I assure you I CANNOT.

So I'm intrigued by this news story of an approach that has reduced hospital based infections by over 60%. But get ready--it's not easy and it doesn't involve hand washing. To do this, the pilot project used:
This is what it takes to make a large dent against these superbugs. I'm relieved to find out that loading another requirement on overworked staff wasn't the solution. But just try telling that to the administrators who don't work on the units and don't directly care for those 12-20 patients an hour. One thing this study tells me is that the infection problem wasn't due to staff, but was due to the surfaces in the hospital. It takes a whole lot of effort to get those surfaces safe.

One of the most well-known articles on the subject, published in the Atlantic, tells the story of how a TV executive's father died from several of these infections. (Here's a shorter youtube version if you don't have time for a multi-page article.)

The author describes a lot problems, not many solutions, and puts faith in the idea that health care needs to be overhauled to become responsive to patient needs. How exactly do we do that? Clearly, I'm not a fan of this author's sincere but ultimately incoherent ideas. As a country, we obviously have to overhaul our health systems. This robot story shows just one small aspect of the changes we need, and also shows how complex the situation is. Don't kid yourself that it's not. 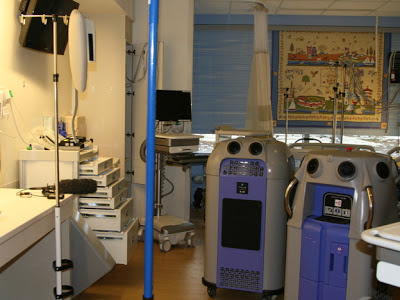