Big news about a small deal

Hooray! The budget deal was done with a few days to spare.

This isn't really a surprise. The hard work came in convincing the GOP to start negotiating and stop trying to defund Obamacare. So the real accomplishment was achieved get in October and consisted of getting the GOP to stop being crazy and act like adults. Since that deal, the adults have been in charge, and the adults were able to make a deal by splitting the difference. Of course, any fifth grader can probably average $967 and $1058 and get an answer close to $1012; it takes adults to do the math when it's billions.

The harder work was walking back some of the sequester spending cuts and putting other cuts or revenues in their place. The new revenues (called fees) are getting the press notice. The most notable one is the increase in the federal fee for airport security that's added onto the cost of airline tickets. This fee is increasing a non-painful $2.50 per ticket. It means that less general revenue (such as income taxes) will be needed to subsidize airport security, freeing the money for other spending, of course. This fee hike seems fair to me--it's not huge, it's not soaking one group, it's making the service pay for itself more. That's all good.

But what about those other cuts, which were supposed to be more targeted? I looked it up and it's the same cutting "waste and abuse." I hope they have actually done their homework and identified waste they can cut and therefore save actual money, not vapor money. But it's not really belt-tightening...

...except for federal employees, some of whom will now have to contribute more to their pension funds. This sounds fair too. It broadens the pain among the federal workers, who've suffered somewhat less than private sector workers.

The money that's been freed up is being split equally between defense and non-defense spending, so both sides are getting a small extra helping from the pot. That means there's not much budget discipline in this deal. It's sliding back from what the sequester tried to achieve--actual reduction in spending. I don't know how much of the sequester will actually go into effect. One article said 50% of what was planned for 2014 and 2015. So much for our collective attempts to rein in federal spending. We didn't even maintain half of round 1 of the cuts. We are sad wimps indeed.

I'd really like to see spending reduced in a gradual way, with the least effective spending targeted first. But Dems are set on protecting all their favored projects and so are the GOP. No one wants to give up anything on their side for the greater good. Sigh. 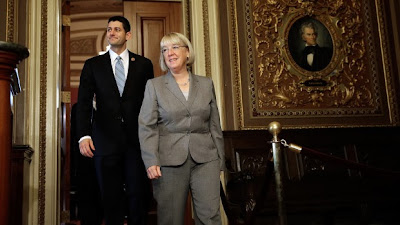 Extras. Analysis from the Heritage Foundation. The analysis of the airline fee increases is obviously muddled, which I discovered by following the link they helpfully provided. Some numbers from WaPo, an overview from the Atlantic Wire.
Posted by ModeratePoli at 7:38 PM