That's Nelson Mandela according to some comments in response to a National Review column where the author admits to being so wrong in his conservative's fear of Mandela.

I suppose that it doesn't matter if you manage to avoid a bloodbath when you negotiate the end of oppressive, violent minority rule. It doesn't matter if you try to heal your country through truth and reconciliation, and you largely succeed at that awesome and unbelievable task. To some people with tiny brains and tiny hearts, you're just scum. And a baby murderer.

For myself, I believe that angels sometimes walk among us, not as supernatural beings, but when people are inspired to do more good than you thought was possible. Farewell, Madiba. Deepest thanks for making a world so much better. 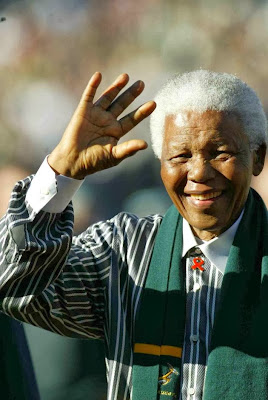 Update 12/10/13. Where did the talking points against Mandela come from? WND, perhaps, or Free Republic, or maybe this White Christian neo-Nazi site. Yuck, the places these people hang out.
Posted by ModeratePoli at 10:51 AM