In my last post I discussed some of the fiscal aspects of the deal--the simple math, walking back part of the sequester, some fees--mostly small stuff.

The bigger impact of the deal is that it's a two-year budget. There won't be a government shutdown for two years. This is an even longer period than that covered by the August 2011 deal, which laid out the budget until after the next big election. Why is this for a longer period, instead of until after the next election? A good question to ponder.

The Tea Partyers and their organizations are trying to raise a ruckus over this deal, but John Boehner told them to shut up. Besides, it's a done deal because THE HOUSE ALREADY PASSED IT!!!!! Wow, that was fast, and was planned to be that way. The House gets to adjourn and soon the Senate will rubberstamp the deal too. And everyone goes home for Christmas unlike last year. If you're taking a Christmas trip to a national park or monument, they'll be open and staffed. [House vote: GOP 169-62, Dem 162 -32.]

The Tea Party is a clear loser in this. The only leverage they'll have is the very dangerous debt-default-no-debt-ceiling-increase gambit. Their numbers aren't high enough to carry out that dynamite trick, but they can still make noise about it. This article points out that Paul Ryan gains stature as an adult politician when you need one. No one is writing the same about Patty Murray (I just checked). She's still a hack in my book, but she can be a good little sock puppet for Harry Reid when he needs her.

So, what will the two parties do in the next two years? They could start the really tough negotiations on Medicare, Medicaid, and, to a lesser extent, Social Security. They could lob mudballs at each other for the next 11 months until the 2014 midterm elections. The GOP could continue its Cold Civil War, and it could completely explode. Since it doesn't take that many people to negotiate, we could have all this possibilities playing out at the same time. Any negotiations that occur will be only exploratory because each side will want to wait for the outcome of the midterm elections in hope for an improvement in their position. (I should clarify who might negotiate: the establishment GOP, the establishment Dems, certainly not the Tea Party GOP.)

This is a better outcome than I was expecting. They compromised without kicking and screaming, and actually changed the terms from the previous testy agreement. That shows a modicum of flexibility where I hadn't expected any. Wow. Merry Christmas, everyone. Peace on Earth, goodwill to men. 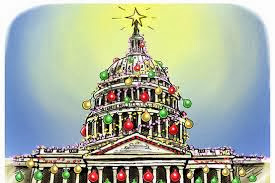 Posted by ModeratePoli at 8:40 PM

It's not through the Senate yet. They are busy (or the GOP anyway) trying to make a show of defiance by bringing Senate business to a practical standstill over not being able to cripple President Obama's constitutional right to appoint judges and people to work in his administration.

Further, the "deal" us subject to a filibuster and it is quite possible that the Senate GOP will look to stick it to the House GOP for hanging them out to dry in October. And the outside TP groups have shown more impact challenging incumbent senators than much safer House members.

But I felt that for the Dems in the House to go along with the deal, the House GOP had to deliver at least 150 votes. In the end, it was 170 so both sides have cover for basically a small improvement over sequester. The GOP also loses a big argument going into 2014. If they say government spends too much, they are the ones who voted for it!!

This is also what the TP folks are so upset about. They want the argument more than a compromise, whether it's a failed strategy or not. So the Dems win on forcing the GOP to actually both compromise AND vote for it, but do not win within the actual deal. They can continue to pound the GOP on unemployment benefits, minimum wage, economic fairness, and everything else where they have the upper hand politically.

So I think it's possible that the Senate GOP will scuttle this deal to try to exact more concessions. I'd advise the Dems to do the same unless at least 25 GOP Senators vote for it. If not, they should attach extended unemployment benefits and pass it, then send it back to the House, who would have to come back to DC.