Why we should build the Keystone pipeline

...because these are the right kind of jobs. These jobs are involved in producing something of value in the world, and that value isn't likely to evaporate in a slowdown. Some industries, like retail, the arts, and casinos, don't have vitality because people cut back strongly in these areas during in a recession. Of course people cut back on energy usage in recessions too, but not nearly to the same degree.

So, if we build the pipeline, we'll have the construction jobs and then the maintenance and control jobs. We should also be collecting transit fees. If the Canadians want to run this pipeline through our country, they can  pay us some sort of royalty, but not so much that it becomes uneconomical for them to use the pipeline. If the oil ends up being processed in the US, there are more jobs in that too. But there's also a strong chance that the oil will be exported, so we shouldn't count on refining jobs. The long-term benefits to this country may be limited to maintenance jobs and transit fees, so that's what we need to lock in.

There may be some strong reasons not to build the pipeline too. If the pipeline leaks and causes expensive environmental damage, there go all the profits! If there aren't profits, why the hell would we want it? But probably the pipeline can be built and operated safely. I don't know for sure because it's outside what I can readily research.

Other considerations, like how dirty the oil is, how much carbon pollution it causes, how the extraction may cause environmental damage to Canada--these considerations are less important than our national need for productive jobs. I wish it wasn't so, but I feel it is. We have lost so many of our productive jobs, and this project would replace some of them. These would be new US jobs and new foreign exchange flowing into the US, not just eating the lunch of some other part of the country, so we need this.

We should do this project and other projects that bring production back to the US. That's the only way to rebuild a strong economy. An economy based on service jobs and finance--not so good, as the past decade has shown us. 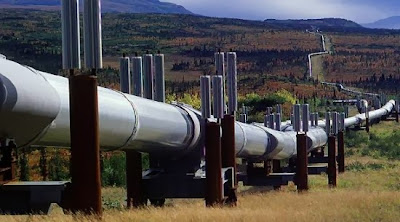 I don't know how much you've studied this issue, MP, but there are a couple of critical elements that you have not mentioned:

1) There is already a pipeline from Canada to the USA called the "Keystone Pipeline". See http://en.wikipedia.org/wiki/Keystone_Pipeline

What is at issue is the Keystone XL pipeline which will allow the Canadian oil to leave North America far more cheaply than it can now. so ...

So are all of those temporary pipeline construction jobs and a few permanent management jobs worth the increase in gas prices consumers in a large portion of the US will face once the North American oil heads out to world?

That's not as easy an equation to solve, I think, leaving out the decidedly weaker arguments about the environmental nature of the oil itself.

Canada could build a pipeline from Alberta to, say, Vancouver to export its oil beyond North America, but I suspect that would be too expensive to build over the Rockies and they don't want to risk environmental damage. That's not a trivial concern, and pipeline ruptures are neither rare nor simple to resolve.

I'd accept the new pipeline if the oil stayed in North America or American consumers didn't have to accept higher oil prices as a result of the new buyer competition.

@dangerous, As always, correction and additional relevant information are greatly appreciated. It's too bad that the information on the economic results of changing the terminus aren't front and center in the discussions. Put all the key points on the table and then hash it out!