Fact-checking is second-nature in me. So when I saw this comment, I had to check it out (emphasis added):


"Godless secular leftism is the end result--complete apostasy and the existence of a society that rips down symbols of the One God and literally puts up monuments to Satan." -- National Review comment

My good friend Google helped me discover that this is a real story, as unbelievable as that sounds. The quote is not quite accurate in all its parts. A tiny segment of society is trying to put up a literal monument to Satan, namely a statue of Satan. The same tiny sect isn't ripping down the symbol of the One God, but rather trying to share public space with a display of the Ten Commandments.

Here's the story: The Oklahoma state government allowed the display of the Ten Commandments on state property by the State House. The monument was paid for by private funds, so it wasn't literally funded with public tax monies. Some other groups have sought to erect statues to other religious figures in the same place under a fairness doctrine. These groups include a satanic cult (now raising funds) and a Hindu group that wants to erect a statue to the monkey god Lord Hanuman.  The ACLU wants the Ten Commandments monument removed, and no religious monuments at the public site.

Now, who seems to be the voice of reason? And who didn't pay attention to foreseeable consequences? Sigh. 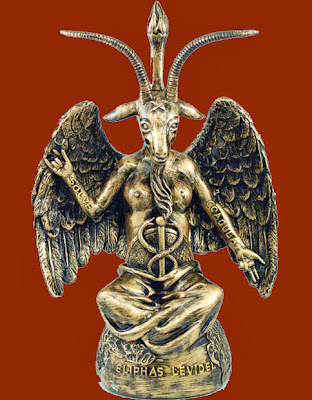 Update 1/7/14. See the statue proposal submitted by the Satanists. Children will love it, to the horror of non-Satanist parents.

Posted by ModeratePoli at 2:46 PM