One thing I learned: Cultural differences, cancer, and ACA

I'm a strong supporter of ACA. However, I didn't realize until this fall how much my middle-class background contributes to that viewpoint.

Here's the background. Middle-class people are used to living comfortably, with enough money so that running out of money isn't a problem that they've faced. Sure, some get into money trouble by excessive spending or risky investments, but most middle-class people avoid that because they strongly fear poverty--the hand-to-mouth existence is the opposite of middle-class security.

So imagine how a cancer diagnosis affects a middle-class person. He isn't used to the uncertainty, and the treatment of cancer is almost always physically unpleasant. However, it's manageable if there's a good chance that you can return to your old life.

Now imagine that cancer diagnosis if you knew you couldn't return to your old life. This is how it feels when a middle-class person faces an extremely expensive, uncovered medical expense. You are almost guaranteed to plunge yourself and your family into a poverty they have never experienced before.

It's little wonder to me that some/many middle-class people in this position might choose to ignore the signs of illness. On one hand, it looks like they (that is, me) value money over life. However, a different way of interpreting the choice is that they choose to maintain their family's comfort and way of life over their own lives. They sacrifice their own lives to maintain the family--something which is easier to understand than why they won't pay what it takes to treat the illness.

This is how I think, and perhaps I'm generalizing too much. But I'm not the only one who feels this way. This also explains the behavior of the woman made famous in the anti-Romney ad. She chose to ignore her symptoms because she didn't have medical insurance, and died because of it. She avoided saddling her family with debt--maybe they even got a life insurance payout. That could well have been preferable to her. I certainly would be to me.

This is why good medical coverage is so important to the comfortable middle class ethos. It's probably one of the first questions families ask when someone gets a job. With more of the middle-class out of work, 2008 was a great time to push for universal coverage, and it finally passed, though more because of the 60 Democrats in the Senate.


Answers from the class divide

If you don't believe there's a class divide in how people view health coverage, read this post giving advice to the uninsured. Look at the range of answers, from which social workers are the best; to how to cash in your insurance to pay for your care; to shopping around for care in other countries. The advice strikes me as coming from solidly middle-class people... until this answer from a commenter named so_so (sorry, no link):


"In August I was diagnosed with a Nice big fat cancerous tumor in My Bladder,,, It Required surgery because I had to have a Catheter .. Could not Pee!!!! [...] I was with a Catheter for almost 1 month and family took up a collection for me to give the Doctor 500.00 Otherwise I was just out of luck.... Needless to say I have not been to the Doctor again... Can not afford it... I do not have money....And do not want Charity... It does not make me feel good at all....( Still not over the Family and X family I had sending 500.00 here... Yes grateful, But taking help from People You know hate you is not a good feeling... ) And that will never let you live it down,,,EVER!!! despite the 500.oo they sent I now owe the Hospital close to 10 thousand.... And it was a day surgery,,,, I talked them into letting me go home....I knew i could not afford the stay.... Glad I did not stay,,,, It will take me a good long while to pay that off..... The Doctor told me 50/50 chance it will come back...."

I don't believe this woman will pay her $10K hospital bill, but it didn't keep her from getting or taking the medical care. I was astonished by this post because it is so different from my attitude. I wouldn't take on medical debt I couldn't pay as this woman did. Though she doesn't admit it, she is a charity case pretending that she isn't one. That option probably isn't open to me, nor should it be necessarily.

Why should my child's college fund, my retirement savings, my additional savings, and the equity in my house be exempt from the bills I run up? Sure, I'd like them to be, but that's not how our personal finance laws work. So I assume charity care is reserved for those who don't have the funds I have.


Self-reliance vs. Outside security

Here's another example of the difference in attitude to how the uninsured should deal with medical expenses:


"I have a good friend...  He is a manual laborer of sorts and has never had health insurance all the time that I have known him.  I am aware of one time that he experienced kidney stones and was in real agony.  He went to the Emergency Room and was treated.  The bill was $4,000.

He depleted his entire savings account and paid the bill in full.  The only thing he owned, which would have been attached had he not paid the bill, was his 12 year old pickup truck which he had to use to work.  I would also add that he has suffered with a bad back for 10 years but still has been able to work, most of the time, in pain.  But work, yes he has continued to do so."

The teller of this story, a conservative I follow named Anson Burlingame, sees this as a story of self-reliance. I see it somewhat differently. Yes, this man was self-reliant. He's been careful and hasn't squandered his money, and toughed it out what he could. But he's also used his entire financial cushion in one day, and he doesn't have any money for the next emergency. What will he do next time? That might also be another reason why he's a hero to conservatives. This man is willing to do what a middle-classer fears so much--pay all the money he has to settle his debt, and go on with his life. Why can't a middle-class family do the same?

There is a cultural difference, not just political differences, in attitudes to ACA. Many approve of charity for the truly poor, but everyone else should be self-reliant. The safety net shouldn't be provided by government, but by the family and community. The Mommy-State takes away this self-reliance and eliminates the need to stay on good terms with your family and community. You can be selfish, lazy, rebellious, or irresponsible, and Mommy will still take care of you. There is some truth to this, but it doesn't capture the whole truth.

The whole truth is that we each have a filter through which we see universal insurance. Some of us see it as a necessity for the financial security we value highly. Others see health insurance as a bonus, but it's wrong for it to creep into the category of a necessity or a birthright. We used to be made of tougher stuff, and not rely on government guarantees for our lives and healthcare choices.

As I said before, possibly I'm overplaying how an uninsured middle-class person would respond to a cancer diagnosis, or I'm generalizing too much from my own personal reaction. I'm not certain, but I see the evidence that others respond the same way. 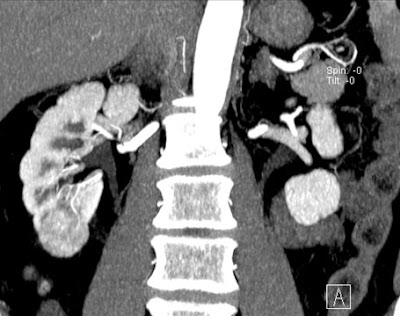 What we're scared of: expensive and no guarantees
urology.ufl.edu

Extra. Uninsured cancer patients are twice as likely to die.

Posted by ModeratePoli at 4:26 PM

Thank you for this post, MP. I think it's important to note that most people, even those in the upper-middle economic class and even lower-upper class can face bankruptcy from medical situations unless they have good insurance coverage to protect their assets from that risk.

And I think the other important point is that the cost of medical care is beyond the reach of most people because they don't have sufficient assets of any sort to afford the services of highly-paid and highly-skilled doctors and other providers.

Supposedly advanced societies have decided that reasonable medical care should extend to everyone in the society regardless of ability to pay. Naturally, that irks those that end up paying more since they earn more and have accumulated large asset bases. They don't want to say that in polite company, but they feel that way and prominent people have been caught expressing that sentiment. As a middle-classer, you can see both sides of that since you probably feel that you contribute at least a little bit to the care of the indigent, perhaps at the risk of being indigent yourself.

Nobody seems to want to say so, but the alternative to universal care and its requirement for universal medical-financial-risk coverage is suffering and bankruptcy.