I realized earlier this year that I can't imagine what this country would be like without Ronald Reagan having been president. Not having him would have been similar in impact to the civil rights movement failing. I also realized that I would have voted for him at the time if I had known how his leadership would have played out.

I didn't vote for him, but not just because I was still habitually in the liberal camp. Many of his positions were pure bullshit (bring back school prayer) and some seemed dangerous, like the bravado against the Soviet Union. I already knew not to believe everything a politician promised, so I didn't worry much about the loss of abortion rights.

The impetus for my thoughts and this post was hearing a Commonwealth of California broadcast with James Baker. [Sorry, but I couldn't find a link.] He spoke about several environmental issues, including Reagan's strong support for a robust treaty on the industrial chemicals linked to the ozone hole. That is such a contrast to today's GOP.

After listening to James Baker, I was in a particularly pro-Reagan mood, and I started to wonder: did I have any solid reasons to worry that Reagan was against environmental protections? Then I remembered that Reagan had appointed an egregious twerp as Secretary of the Interior. This guy was so bad I can still remember his name--James Watt. That memory killed the pro-Reagan buzz and put me back into crisp reality.

So here are my lists of what I liked and disliked about Reagan in retrospect:

Luckily we were spared the worst damage that Reagan might have wrought, but there were definitely some big risks. Because we got mostly the pluses and less of the minuses, Reagan was quite a good president. I sorely wish his like was running for office these days. 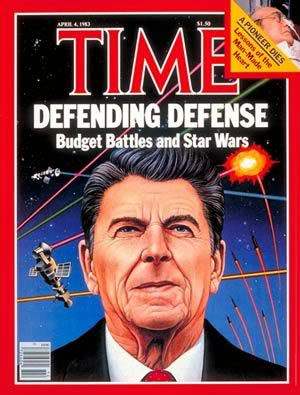 Extras. Reagan's Top 10 from a brainless conservative viewpoint, that is, the typical kind of bluster. A compendium of short intelligent essays. I'll be working my way through them. A fascinating detailed list that's remarkably even-handed.
Posted by ModeratePoli at 2:40 PM

BIG MINUS: Allowed so-called "supply-side" economics to become default for USA fiscal policy. Reinforced the GOP belief in huge deficits while under a GOP president, anti any deficit under Dem president. Fact is, the GOP discovered that their benefactors (i.e., the rich) like the idea that they got both tax cuts AND higher real returns from their loans to the government and the resulting increase in real interest rates paid on corporate bonds.

BIG MINUS: Wasted a huge amount of money in a defense buildup attempting to bankrupt the USSR, but practically bankrupting us in the process.

BIG PLUS: Admitted when he was duped on Iran-Contra. It takes a brave politician to admit to being so clueless on something so important.

@dangerous, I agree with the 'supply-side' complaint. However, I don't think he's responsible for the rhetoric or lack of math from today's GOP. It's not as though he's spoken publicly with approval or disapproval over what has happened since his presidency.

The bankruptcy size of the deficit resulted from taking what Reagan did and adding in some multipliers with connivance on both sides.

If you're trying to show you're fair, you'll have to try again. FAIL!

Could he have been duped? Evidence is mixed. Sometimes he was sharp, but he was also in early stage dementia, relying too much on not-so-good advisers.

I hope any future presidents that suffer from the beginnings of dementia will step down. They shouldn't follow Reagan's example and hang in there.

You caught me. I was being ironic. Reagan's presidency had no major pluses. At most, it's arguable that the massive increase in military spending led to the USSR's embrace of Gorbachev and the end of the cold war. It's also arguable that it delayed it by half a decade.

@dangerous, this is one advantage about being an independent moderate--I don't have to pretend that everything Reagan did was stupid! I can look fairly and give him credit. It's quite liberating. And I don't have to give up anything because I can still bash him when he earned it. It's total freedom!

I feel the same way moderatepoli. I think I'd have voted for carter if I was alive in 1980 but Reagan was the right man at that point in time. We needed the economic boost that low taxes and high gov't spending provided. The funny thing is just how keynesian this was-stimulating the economy with military spending and Creating deficits by cutting taxes. My only real problems with the gipper are that he helped spread neo-liberal economics like it was hard science and solidified the place of religious nuts in the republican party

@Anon, Thanks for posting. If you were alive in 1980--ouch! I mostly agree with your complaints about Reagan, though he certainly had a lot of help partnering the GOP with evangelicals.

Please come back again, and be sure to choose a screen name. There's no registration, just click on Name/URL and enter it. That way you have an identity and anonymity at the same time (like me).