Short: View from inside Reid's office

Insider reporting is a mixed bag. It's great to find out what's in the minds of the decision makers or deal makers, but such news stories are often stuffed with the glorification of minutiae. This article, evidently sourced from inside Harry Reid's office, is better than most. It shows the successful partnership and political strategy used by Obama and Reid in this fall's budget negotiation. Yes, the same negotiation where the GOP was switching game plans twice a day.

Here's a summary through my jaded viewpoint: Reid is angry at Obama for giving too much in other negotiations. They agree to a united front and they pull it off.

What is missing is a concern about the next election, and how this deal would help the position of the Dems with respect to the electorate. Instead, the focus is what the Dem elected officials hope to get or avoid giving up in the negotiations--not a bigger picture. How they decide which positions they should stake out and why those are good positions for them, or more importantly good for the country, that's the inside story I'd love to read. 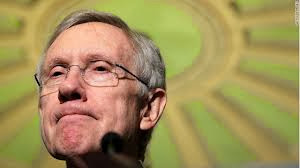 Posted by ModeratePoli at 7:52 PM