So a leading major high-profile semi-recognizable star person from a reality show got rather anatomical when he was explaining why he didn't understand homosexuality or perhaps he was being a homophobe. I don't know why anyone cares because reality TV participants aren't filmed for their mild observations or platitudes, but for their crazy antics.

Then a gay pressure group pressured the cable network (A&E, but it could have been any of them), and the network caved immediately and "suspended" the "star." Publicity ensues. Charges of abrogation of the First Amendment ensue. The news media is delighted because it finds next injection of controversy, especially needed right now because the congress critters (Damn them!) patched together an agreement and went home for Christmas.

I've never given a damn about what a reality star said. Not anyone on Jersey Shore, not one Survivor, not any of the numerous glitzy, boozy, over-made-up Housewives. These people are the lowest, and I don't know what they are doing on my TV (a topic that might deserve a discussion), but what they say is of NO CONSEQUENCE AT ALL.

So ignore it. Don't get involved in a controversy about what an empty-headed media whore says. That also goes for: Ted Nugent, Jon Stewart, Bill Maher, Rush Limbaugh, etc. And Sarah Palin too. She has to decide whether she's a reality star (which is how she behaves) or a politician. If she's a reality star, she doesn't have to been careful. Instead, she can trash talk all she wants. If she's trying to be an influential political leader, her words should matter, and they shouldn't fall to the low level of the reality TV personality, like these:

"Just finished a long week-thinking in a few weeks we could be living in a very different America-pls Excersise your right and Vote.Pls"

"The America I know and love is not one in which my parents or my baby with Down Syndrome will have to stand in front of Obama’s “death panel” so his bureaucrats can decide, based on a subjective judgment of their “level of productivity in society,” whether they are worthy of health care."

"Our opponent though, is someone who sees America it seems as being so imperfect that he's palling around with terrorists who would target their own country." 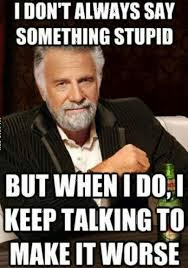 
Extras. Other stupid Palin quotes. More here and here and here. Some people laud stupid. More on the Duck Dynasty person here and here, if you want to research it more. Personally, I regret the time I've wasted on this story, but I did decide one thing: Call them stupid and move on. No boycotts required.

Finally, to be honest, one of the Palin "quotes" above came from a real (dumb) celebrity. Read the other celeb quotes and then you'll realize why we can't hold celebs to the same standards as our politicians, reporters, or pundits.

Posted by ModeratePoli at 4:12 PM

"Say a word out of line
and find that the friends you had are gone forever, forever."