As Jonathan Chait says, the Wall Street Journal loves to give editorial space to any self-pitying billionaire. Two weeks ago, it was one of the Koch brothers.

He wants to share with us the principles that have shaped his life. But instead of identifying riches and privilege as what shaped his life, he pretends that it was simply "dignity, respect, equality before the law and personal freedom."

That's one error in argumentation that he makes. Another is his use of the term 'collectivist.' He correctly defines collectivists as "those who stand for government control of the means of production and how people live their lives." However, Koch also labels those who engage in character assassin as 'collectivists.' So, Glenn Beck, Joe Arpaio, Sarah Palin, and millions of others must be collectivists too. Who knew?

Koch also regales us with tales of what an upstanding environment record his companies have. My first impulse is to greatly doubt this, but let's see if there are any facts (which are definitely more trustworthy than my knee jerk reactions). Google was so helpful again. Politifact gave Koch a "mostly false" rating on his claim. You can also read about various infractions, fines, and climate-change denial activities if you want to.

Koch is concerned that we create "opportunity for all Americans." Does he honestly think that's possible? Can all Americans enjoy the opportunities he had? Oh, Charles, please get real. Very few were born with your wealth and connections. Too many are born in places with poor education, poor infrastructure, and very few job opportunities. It's laughable that you don't notice this.

Koch isn't alone among the rich who think success is available to anyone and everyone. Decades ago, I had an epiphany while watching William Buckley talk about life in the ghetto or the choices made by poor women, or some such. It suddenly struck me that Buckley knew perhaps 10% of what it was like to live in the ghetto. Nonetheless, there he was, pontificating. I wish I could be spared all the rich-from-birth white men up on their high horses telling other people what to do. Even if they have good ideas, they haven't earned any credibility in knowing what life is like for most people.

Can we please shut off their bloody microphones already? 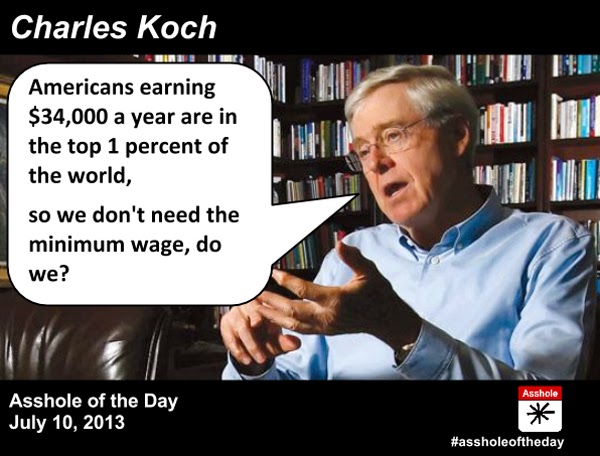