Just as in Remembrance of Things Past, memories sometimes wash over me with their power undiminished by time. Today, it was because of this article about Anita Hill.

In 1991, George H.W. Bush nominated Clarence Thomas to the Supreme Court. The highest court needed a black justice because the only black justice, Thurgood Marshall, had just retired.

Thomas had been groomed for the Supreme Court by the Republicans. There are few blacks among the Republicans, so it wasn't hard for a black Republican to rise. Witness Allen West, Herman Cain, and Dr. Ben Carson in the past few years. Clarence Thomas wasn't a great lawyer or scholar, but that holds true for all the justices right now. I don't know a major accomplishment of any of them.

What fills my memories was the drama of the hearings for Thomas's nomination. Nominations are pretty dull affairs. There is always effusive praise from one side and attempts at gotcha questions from the other. I'm pretty sure Thomas's hearing was like that, but with the added indignation from the liberals that the GOP had a black man (or Uncle Tom) who talked the same trickle-down, traditional respect-for-authority, conservative line that all the old white men did. However, since he was black, the GOP could pretend that they were a broader party than they were. Indignant isn't quite the word for the liberal response--'ape shit' is more apt.

The liberals weren't doing a good job of derailing the nomination, something that they had succeeded in doing in 1987 with the nomination of Robert Bork, a seriously intelligent and detestable person. It looked as though Thomas, this groomed slap-in-the-face at blacks (or was it liberals?), was going to win confirmation.

What Anita Hill said had the ring of truth to me. But this is so subjective. To conservatives, she was a "spurned woman" trumped up by radical pro-choice feminists trying to derail the appointment of a solid, fair man.

I watched her testimony, and I also watched Thomas's testimony in that rare Saturday session. Thomas was full of fire and righteous indignation, and he was very believable. He denounced the charges as a desperate and craven attempt to besmirch a honest man, all for venal political reasons. I would have believed it, and many people did, including some co-workers. (Aside: People are generally good as sorting out the weaselly liars, but we aren't so good at identifying the full-throated ones.)

However, the supporting witnesses for Hill were quite strong, recalling how she told them at the time what was happening. Purely on evidence, Hill's story was stronger. But evidence didn't win over political considerations, and Thomas was confirmed.


The Personal Overlaps the Political

What I remember most was Anita Hill telling a true story that wasn't generally heard before. Her boss degraded her in sexual ways, but he got away with it because it was only words. Some commentators castigated her as a liar, saying that no woman would put up with that treatment.

But I knew otherwise. I knew from personal experience that until sexual harassment became a well-known issue, women didn't know what to do when they were harassed. I certainly didn't know what to do when a senior engineer in his 50's took the liberty of putting his arm around my back as we discussed engineering matters, and he kept it there. On one hand, it might have looked like innocuous touch, but it definitely was unwelcome and uncomfortable on my end.

Luckily, his liberties never progressed. I recall vividly how they ended. I ran into him at the bank, and he put his arm around me again. I thought "I may have to put up with this at work, but there's no way in hell I'm putting up with it outside of work." So I jammed my elbow hard into his side. He never touched me again. He avoided eye contact after that too.

I was a twenty-something woman engineer, one of only two in that factory, and there were no harassment reporting programs back then. I wasn't a trail-blazer, and I didn't know what to do. So I did nothing for a while, then I fought back, then it was over, and I never thought "this is a general problem bigger than me." Thank God other people did see the bigger problem and did work to counter it. This was pure progress to a better world. I'll argue with anyone who says otherwise. 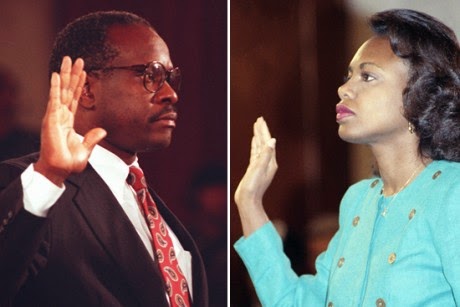 Both swore to tell the truth
Image: salon.com
Posted by ModeratePoli at 4:08 PM