I'm fed up with conservatives who complain that Obamacare is going to bankrupt the country but never turn their gaze on Medicare. The message seems to be that other people can spend buckets of government cash on healthcare, but NOT YOU. You are scum because you don't have employer-provided insurance.

There is no acknowledgement of the real problems in the healthcare system. Here's a big example: how many people know that current Medicare taxes aren't covering current Medicare expenses? I heard this mentioned in passing this week, and it was news to me. If we can't even cover our current Medicare expenses, why isn't that information all over the news? It should be a common point when talking about spending, similar to how everyone mentions the yearly deficit and the national debt now being $17 trillion.

Yet it's not mentioned frequently. The fact is that general revenues are paying for more than 45% of our Medicare costs, meaning that other programs are squeezed. And the BABY BOOMERS HAVEN'T EVEN STARTED GETTING OLD YET.

When are we going to start reining in Medicare? I'd cynically say probably not while we have elections and seniors turn out in high numbers, but I don't think we can wait that long. We need some method to force people and doctors to stop this gorging. We've got to start saying "no," but that means saying "no" when life and health are on the line. I don't know if we can do that. We may believe that we have to spend on our healthcare, no matter how much.

Will it be possible to cut back? If so, how? The easiest way is to cut what's ineffective. That means gathering the statistics, and then convincing or forcing doctors not to order the ineffective treatments. We'll probably need to cut barely effective treatments too. I've read of cancer patients being referred for a fourth round of treatment that's known to extend life for only three months. What is the cost? Would you decrease your own bank account $100K per month to extend your life? If not, then you probably shouldn't decrease the country's resources either.

This also means giving comfort care and end-of-life treatment to frail elders instead of hospital care and expensive ICU treatment. Perhaps we shouldn't be trying to save extremely premature babies and people with very severe head trauma. Yes, we will have all these life-saving and life-extended technology that we will purposefully not use because it costs too much.

As I said above, I don't know if we can do that, just let it alone and not jump in with all that. Our track record isn't good. 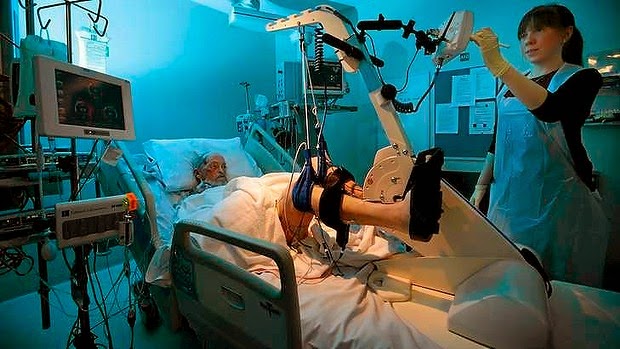 What started this rant? The idea that Ben Carson, the neurosurgeon religious black conservative darling can save us. That and finding out that the Medicare payroll tax isn't covering even 55% of our Medicare spending.

Extra. Healthcare costs are growing faster again after a five-year slowdown.
Posted by ModeratePoli at 12:54 AM

Do you fault liberals the same for not having the right conversation about healthcare as well as conservatives? I do. Their health care conversation is all feels no wallet.

I often wonder why those opposed to the ACA don't bring up the real cost problems more often. There are solid concerns and arguments as you pointed out.

They must be that afraid to mention healthcare rationing and if neither side can say it and the media thinks the topic is too complex for ratings, I don't see a meaningful course change in the future. Seniors will always come out to vote and that populations is little getting a boost right now.

@get, Yes, I rant about both sides. Here's a short rant of my usual kind of rant on liberals (they don't do the math on what things cost).

I think about healthcare rationing a lot, but it's poison to say the word. But that's what the IPAB boards are for. Frankly, I don't know who is worse when it comes to intelligent rationing -- doctors or patients/families.

You are right, doctors and patients both have poor incentives to ration. Doctors are afraid of being sued and in many instances, they get paid more for sicker patients (in hospital setting). patients are shielded from some costs that make them over consume. Example, pharmaceutical companies issue patient access cards that make name brand drug cost the same as generic for the patient while insurance companies pick up the real tab.

Also, I gave you guys your non arbitrary reason for the medical device tax.