How far to take this disagreement?

Some people, like me and most people I know, support marriage equality that permits marriage regardless of gender or sexual orientation. I write about this a lot because I love being married, and I know many people for whom this bond is the best part of life. So I want anyone to be able to share in this blessing.

What about the people who disagree? I've written about my respect for those who sincerely believe that same-sex sexual relationships are wrong or that same-sex marriage is wrong. I've also written that those against marriage equality should stop objecting and stop denying the civil rights of others.

Am I totally confused? I hope not. I see a big picture with lots of people in it. Most of the people are good and have honest intentions, yet they often end up disagreeing. I'm not going to demonize a good person just for holding a belief I find mistaken. For a loud, obnoxious person, I'm going to disagree a lot more loudly.

So, what kind of person is Brendan Eich, the CEO of Mozilla who just resigned under a cloud due to his contribution in favor of an anti-marriage-equality proposition in California?

I don't know what kind of person he is. In my research, I didn't find that he's been a vocal opponent of marriage equality. He was a co-founder of Mozilla, and has worked for years in the open source software movement. As far as we know, he didn't harass gay coworkers and he didn't broadcast his political views through the workplace.

So what did he do that was offensive, harassing, or unacceptable? Some are saying that his financial support for Prop 8 in California is over the line. Software developers, including this one, joined together to begin a boycott. Not because Eich just made the contribution (it was five years ago), or because he just started working for Mozilla, or because he was just promoted to CEO. They started the boycott because they wanted an apology, and he refused to give it. So he was forced to resign.

It's hard for me to see this as anything but intolerant, thought-police-like tactics. His choices were to recant his beliefs or go. Do we want such a binary choice presented to our teachers, writers, broadcasters, doctors, nurses, X-ray technicians? Should I refuse service from a waitress who holds different political views, or can we please just have a limited unfraught transaction?

I don't want to have the entire country carved into pro- and anti- camps. I don't have to know the politics of the CEO of the company that made this computer or that made the couch I'm sitting on. The taint of Brendan Eich's contribution didn't seep into Firefox, which I used for years. It doesn't ruin Thunderbird now. Two years ago, a breast cancer charity tried to purge itself of any connection to Planned Parenthood, even though Planned Parenthood helps with breast cancer screenings. It was stupid to think a breast cancer charity needed to be completely pure on the unrelated issue of abortion, yet some people want to force this kind of purity on charities, or businesses, or what have you. It doesn't work--it's crazy or coercive to implement. Is this what we want in our society--litmus tests wherever you turn?

Let's remember--good people can disagree. Many moral, ethical, and policy questions aren't so clear cut that we absolutely know which is the right answer. When there's a way to live and let live, let's do it. I'm not so infallible that I'm going to condemn those who don't agree with me. What happened to other people, the ones who are so sure,  who will condemn, expel, and purge? Do they no longer want a world with diversity? Wasn't that the goal? 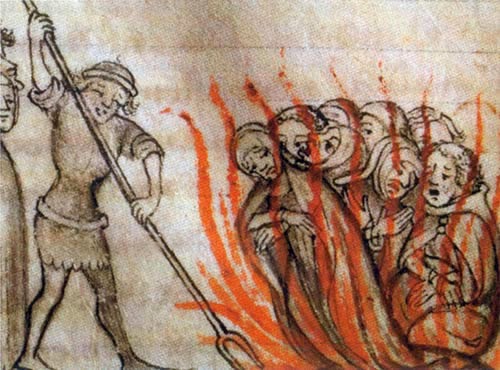 Posted by ModeratePoli at 12:28 AM

Hey, what goes around comes around.