The political history of the Supreme Court

So, what is the real history of the Supreme Court? I started wondering because of suggestions (among liberals) that the GOP might not confirm a Supreme Court nominee for the rest of Obama's term. Looking back at information about the Supreme Court (mostly from Wikipedia), I saw a number of interesting trends.

Supreme court nominees used to be much closer to the president and much more political. For example, Hugo Black was a senator. Franklin Roosevelt (FDR) tapped him because he was young, from the south, and a strong legislative supporter. Luckily he was also a great fit for the job. He was extremely interested in constitutional questions and developed "textualism," a conservative school of thought on how to interpret the Constitution. This is almost all news to me, and quite fascinating.

Another interesting factoid is that president always tried to push the court toward their political side. FDR did it big time because his first New Deal programs were struck down by a conservative court. FDR made a lot of appointments to the court over his 13 years as president, and he was successful in his goal. The court was fairly liberal due to his selections. Eisenhower wanted to reverse this trend, but his choices weren't so effective. He aimed for conservative (but presumably not Jim Crow conservative), but ended up with Earl Warren.

So even after Eisenhower, the court was fairly liberal. Kennedy and Johnson together appointed four judges, but two resigned after a few years. The balance on the court didn't move much because of their presidencies. Nixon, like Eisenhower, wanted a more conservative court yet didn't get what he hoped from his appointees except for his last appointee, William Rehnquist.

By the time Reagan was president, the conservatives in the country were quite fed up with the liberal slant of the court. Per my memory, the biggest complaints were over abortion legalization, the end of school prayer, and limitations on evidence collection and police tactics. However, Reagan didn't give the conservatives what they wanted immediately. For the first vacancy, Reagan nominated the first woman on the court, Sandra Day O'Connor. I wonder how angry his conservative supporters were over that.

His next appointee, Antonin Scalia, probably pleased the conservatives mightily. For the next vacancy, Reagan went with the ultra-conservative Robert Bork. In doing this, Reagan ignored all the buzz that this was going too far. This is just speculation, but I'm guessing that in 1987 (the year of the nomination), Reagan was no longer fully in control of his decision-making. The choice backfired. Democrats were successful in painting Bork as too conservative. The replacement nominee, John Paul Stevens  Anthony Kennedy, was considerably less conservative, to the chagrin of the conservatives.

What I learned in all this: 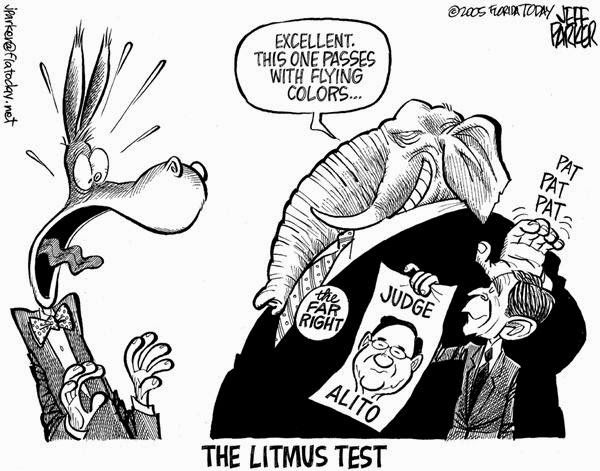 This is an interesting overview and an accurate analysis as far as I can tell.

Politicians pick judges they like and "impartiality" is not high on the list of attributes those politicians treasure. Voters care -- at least a little bit -- so they tread carefully on their selections.

You focused on the Supremes, but lower court judges are usually more important. Getting a case heard by the Supremes is not easy; circuit court appeals are automatic. GOP presidents have been more successful recently at getting ideologues into District and Circuit judgeships, mostly on the issue of abortion, corporate rights, etc. The Dems still seemed more interested in legal qualifications.

But the biggest change that you didn't mention is that all Article III federal judges need Senate confirmation. The GOP has been far more ruthless in stopping Dem president appointments -- using procedural obstacles including the filibuster, anonymous holds, etc. The Dems have shown more courtesy, probably in the vain hope that the GOP would reciprocate. Fat chance.

Judges and Justices will continue to be more political and rigid, less impartial, and more committed to their party and ideology. Those doing the appointing and/or selected judicial candidates (where applicable in the states) are ever more sophisticated in their selection processes to get what they want. The Dems are playing that game better now, too, so I suspect your central thesis is correct. No more Ikes nominating Earl Warrens. (Once burned, twice shy.)

The tug of war will be most pronounced when a president of one party needs to get a nomination through a Senate controlled by the other party. I'm guessing that the ratcheting of opposition is now at maximum, and even nominally qualified nominees will be voted down on a purely political basis and voters will not punish those who do so. In fact, most will be rewarded for it.

@dangerous, I focused on the Supreme Court because I can easily research that. Researching the lower courts is a daunting task, and I'm not driven to do it.

Blockade of confirmation of judges was a nasty tactic started by Reid. The GOP just generalized the tactic to everything.

The replacement nominee, John Paul Stevens, was considerably less conservative, to the chagrin of the conservatives.

Correction: Kennedy was the replacement, not Stevens. (Reagan also nominated Douglas Ginsburg, which failed following revelations of past marijuana use.) Stevens was appointed by Ford and turned out to be one of the most liberal justices on the Court. Kennedy is commonly considered one of the conservatives, albeit a relative moderate.