Ebola in Texas, but not worried yet

I wasn't worried about the two Americans being transferred to Atlanta for treatment for Ebola. Am I worried yet with this case in Texas?

No, not yet. But this is of greater concern. The Liberian man exposed a bunch of people before he was quarantined. Now those people may come down with Ebola too, and they could spread it to others. That's what has happened in West Africa.


Handling it right over here

It could happen here, but it won't. We have strong medical systems, not only to treat those with the illness, but to monitor those who may have been exposed. Some are in quarantine to prevent more exposures, and to limit the number of people who have to be monitored.

The personnel directly caring for the Ebola patient are probably limiting their contacts too. They shouldn't be going home to their families and attending church, ball games, and going to shopping malls. It's a big sacrifice to limit contacts, but it's not for a long time, so I think the medical personnel would be willing to make it.

A big problem in West Africa is that the sick weren't separated from the well, and they infected a fair number of people. By the time it was clear that isolation was needed, there were already too many infected people, and the medical system was overwhelmed.

That's unlikely to be repeated here in the US. We have a lot of medical resources to dedicate, and just one case so far. Any contacts who start showing symptoms will go into complete quarantine immediately, not after they've exposed bunches of people. That didn't happen with this first case, but the lesson has been learned. The medical system is on alert and will quarantine, and we will avoid the multiplication effect that occurred in Africa.

The warning sign to watch for is when people are getting sick at home and staying there, denying that they have Ebola. That denial is dangerous because it allows the sick person to infect others. That's when it can snowball. A different warning sign would be medical personnel dying or fleeing hospitals, hospitals refusing to take more patients, or hospitals being attacked. This has happened in West Africa, but there's little chance we'll see it here.


The importance of honesty (again)

This is a lesson in taking the right precautions and being truthful. The man from Liberia lied to get on a flight out of Liberia, lied again by not telling hospital workers that he'd been closely exposed in Libya, and probably lied at other times too. It's important for people not to lie anymore about it. Some people are asking whether we can trust our health officials. From what I've seen, yes, they are telling the truth, and they are taking all the right measures.

In one more month, we won't have a concern about Ebola in Texas. We'll have an all-clear, just like we eventually got in Atlanta. Till then, we have to take the right precautions, and keep this small. That's what we're doing, so it's going to be alright. 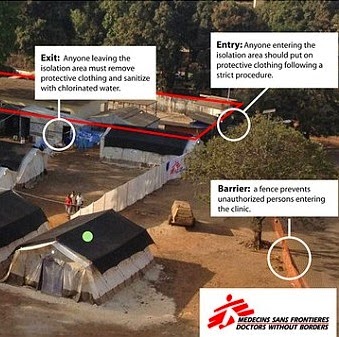 Posted by ModeratePoli at 12:21 PM

Provided they scrupulously follow bloodborne pathogen precautions, hospital personnel caring for Ebola patients can be free to go home to their families and to their other activities outside of work. They should be closely monitored for signs of infection.

@anon, that's the textbook way of doing things, to carry on. However, there have been two unexplained transmissions, so I think more caution is warranted. I would do that for my family and community, and I hope the hospital provides them with living space so they can make that choice.