Yes, according to National Review.

But this isn't news. They ran a toned-down version in 2009. Why the revival? Because she said one other thing recently that could be similarly misinterpreted, so NR couldn't pass up the opportunity.

Here's what actually happened according to the person who conducted the interview. However, you won't see National Review running any clarifications, corrections, or apologies. Either the National Review actually thinks a Supreme Court justice is pro-eugenics, or they have no scruples about lying in that way. Amazing.

Now I think Ted Cruz is a demagogue who'd say almost anything, but I don't think he's a secret Nazi. But some people actually find it credible that Ginsburg could be the equivalent of a Nazi. Isn't that amazing?

Most likely, thought processes aren't involved, so these readers of National Review don't actually THINK Ginsburg supports eugenics. Instead, a NR writer tells them this, and they start repeating it because they are complete moron zipperheads with no thoughts of their own. Yes, now we're in a familiar and credible landscape. Partisan idiots will 1) believe lots of crap, and 2) repeat all of it. That's the price of reading politics these days.

And the writer of this trash--Kevin Williamson ... again. Another non-surprise. Sigh. 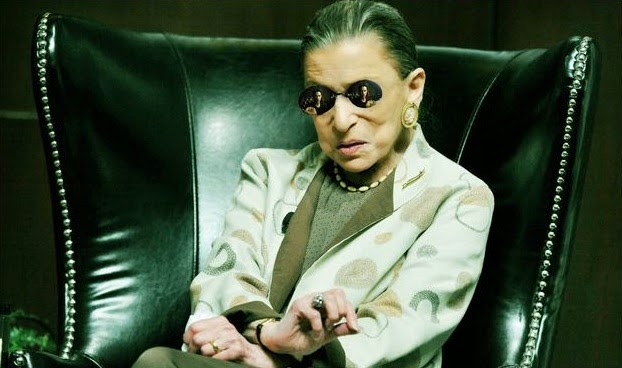 Now judging your fitness to reproduce - the Notorious RBG
Image: badgirlchats.com
Posted by ModeratePoli at 5:15 PM