Obama had a formal Rose Garden announcement back in June that he was going to take a unilateral executive action on illegal immigrants currently in the country. His announcement followed the admission by John Boehner that the House wasn't going to take up immigration legislation, The extent and details of the immigration program weren't decided at the time, but it would be done before the end of the summer.

Fast-forward to the week of Labor Day (unofficial end of summer), and an unnamed "Whitehouse official" floats the word to the Reuters news service that the bold action on immigration won't happen until after the mid-term elections in November.

Obama has certainly bungled this one. He acted like the big man in June, announcing something bold. But when it looked like there was going to be a political cost, he became too indecisive to handle the issue before the elections. I seriously have to wonder about his thought process. Did he think there wouldn't be any negative consequences for fiat action on immigration? If so, that was uninformed thinking.

A change in the immigration policy of the magnitude he's considering wasn't likely to go easily. Giving legal status to 2 million, 4 million, or even 5 million was going to cause pushback, and fanfare around it would make it worse. Obama may have been lulled by the general acceptance of his temporary amnesty for foreign-born children brought by their families. However, these children, who grew up in the US, speaking English and going to American schools, were a sympathetic group of roughly 600K, far fewer in number than the adult illegal immigrants Obama is now considering legitimizing.


Oops--Forgot to check the weather

Obama also neglected to check the national scene for current and foreseeable immigration problems. Supposedly the problem of unaccompanied minors had already started at the end of 2013. Unless there was a massive increase, the officials in charge of immigrant detention should have anticipated that they would run out of space and money. Perhaps they expected a charitable response, but that's not what they got. The public became alarmed at the number of children, the extra expense, and the unintended and unforeseen consequences of the change in immigration policy. They aren't in the mood for yet more changes to the policy.

So Obama, seeing the winds shift, and getting frantic requests from vulnerable senators, has decided to delay the decision and announcement of changes to immigration policy. He says that he wants to better educate the public. The public is likely to smell the smokescreen, and become more suspicious. The delay isn't going to help Obama or the vulnerable Democratic senators. I can imagine the campaign ads already: "Obama has an immigration plan that is so drastic that he can't unveil it before the election. Is Senator X going to keep him in check, or do we need a Republican in the Senate to do that?"

Of course the Latino groups are furious. They were wooed for potential political gain, then dropped for more immediate political considerations. Yes, that burns.

So the vulnerable senators will suffer a double-whammy. Is there any upside? Probably not for the senators, but there probably will be some advantage for the Dems in the future. Obama is likely to carry out a change in immigration policy, and probably on the larger side instead of the smaller (more than 2 million). That means more illegal immigrants getting temporary legal status, and happier and more loyal Latino voters.

What's so familiar about this immigration debacle is that all the moves have been based on expedience. There hasn't been a sound, thoroughly-considered formulation of policy. But that's the way immigration has been handled for decades. It's greatly benefited some powerful groups, and they've held sway. The winners have been the immigrants, their aligned voters, the Democratic party, and business owners. The losers have been the Americans who lost job opportunities to these migrants.

So, some definite winners and rather diffuse losers--no wonder the immigration policy doesn't change. Outside of the Tea Party (who fight all things that are not as they were in the 1950's), very few will speak against immigration. I'm even reluctant to speak against it, though I've decided that I should. (I realized back in January that immigration had to be severely tightened, but didn't write about until June.) How many people will stand against those who have an interest in the immigration status quo? Not many. So a bad immigration policy is the nearly inevitable result. 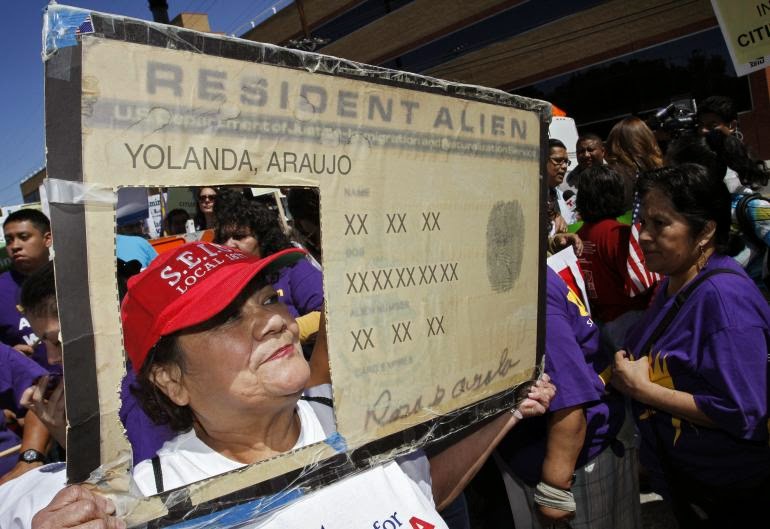