Why don't we have a travel ban?

The Ebola issue is much more political than it should be. Of course, many politicians can't restrain themselves from engaging in bashing their targets over a disease that's as deadly as Ebola. In the 1980's, the politically-infected arguments raged about AIDS, and we haven't had a disease with this much potential since then. However, the politics around AIDS perhaps should have been a lesson to prevent politics from ruling the discussion. But we're Americans, so we inject politics into everything.

Even if you don't think you personally are bringing politics into your viewpoint on Ebola, you probably are. To see how the politics play out, just ask yourself why we don't have a travel ban. Your answer is likely to fall into one of two categories, both of which are heavily influenced by politics.


There must be a good reason

I didn't ask myself about the lack of a travel ban for a while. I'm not sure why, but my left-of-center tendencies probably had something to do with it. I figured that the administration had a good reason for not banning travel from the epidemic areas. I didn't believe that cover stories that it was due to vital trade ties, or that commercial flights were necessary for our humanitarian efforts. I figured that there was a reason that the administration didn't feel comfortable talking about. Perhaps they were worried about human smuggling taking over if there were no flights. (That was my top theory.)

However, my support was based on faith or trust that there was a good reason. Faith and trust--not good scientific reasons.

So why don't we have a travel ban? Maybe it's the smuggling worry. Maybe we have a secret agreement with most European countries that we won't cut off flights. That way the affected countries have contact and a safety valve, but no country with good western medicine ends up with a disproportionate number of Ebola cases (that's another theory, in case you didn't notice).

This is still speculation, faith, and trust. If we based our policy simply on reducing our chances of an Ebola epidemic to the lowest possible level, we would have a travel ban. We would also not have allowed the American workers with Ebola to return and be treated in American hospitals.

So this administration is willing to take some risks. The science does show that the risks are quite low, and that's been born out in the US. The only known cases of transmission in the US occurred between a deathly ill patient (with copious diarrhea and vomiting) and his nurses. No one in his family became ill.


There must be a nefarious reason

If you don't trust the president and his administration, what do you make of the lack of a travel ban? I've read a bunch of theories on that:
By not being clear in its reasons, the Obama administration has opened the door to a lot of speculation. That speculation is either supportive and antagonistic, and all of it is tinged with politics. If you thought your opinion was based solely on science, I hope this post showed you otherwise. 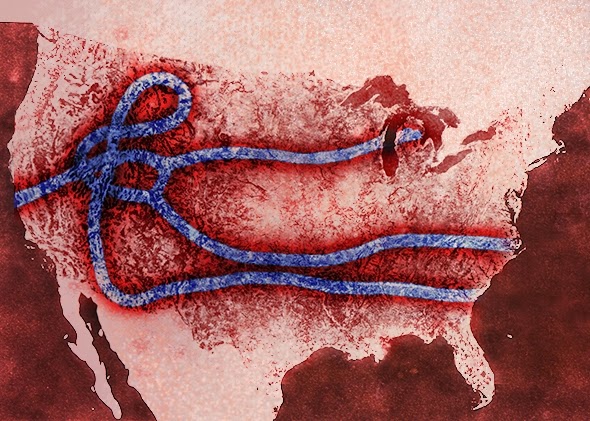 Extras. Christie and Cuomo teamed up to show that they are post-political and would institute a quarantine together. It fell apart in a couple days because it was based on political gamesmanship. Ebola politics in Louisiana, a state that isn't likely to be a locus of Ebola issues. The media steps up to help Obama again--travel bans don't work. See, there must be a good reason.
Posted by ModeratePoli at 12:48 AM

First, travel bans don't work. Someone coming from Africa could first go to Europe. Do we then ban travel from Europe?

Knee-jerk fear reactions are always wrong and always counterproductive. Ebola, as awful as it is, is not that contagious. It's not airborne. You have to screw up in dealing with someone with the disease to get it, and they screw up a lot in Africa, particularly when handling the corpses. If Ebola were more contagious, nearly everyone in those parts of Africa would be dead already.

A "travel ban" feels good to people, who act out of fear and stupidity) and politicians play to that for their own agendas.

The same holds true for "quarantine" advocates. Again, the policy faces the same questions. Do you quarantine everyone on the plane with the person who has been to those parts of Africa? Perhaps if Ebola were that contagious there might be an argument. Instead, we should have a policy of vigilance with professionalism.

That is what we get from President Obama's administration, attempting to deal with another phony media and political crises without making the situation worse or stoking more irrational fears.