I've read many comments about how the US is doomed to have an Ebola outbreak because Obama is such a horrible president. I agree that there are plenty of reasons to think the Obama isn't a good president, but it's quite a leap to assume that we'll have people dying of Ebola because of it.

Of course, many people think we are doomed since the country reelected Obama. We were doomed by ACA, so we must be at least doubly or triply doomed. So if we are doomed, any crisis can obviously boil over and burn us all. We were threatened existentially over the summer by immigrants, which turned into immigrants with dread diseases. Then that story morphed into ISIS terrorists infiltrating through the Mexican border. Now we are doomed because ... Ebola!

Some of the concern  has some logic to it. For example, the administration loathes racial discrimination, so it won't ban travel to and from the African countries where the epidemic is occurring. There's some logic to that complaint. The administration hasn't done a great job in explaining why it allows recent visitors from the infected countries to come into the US without quarantine. It doesn't lay out the criteria for when to impose these kinds of measures, so it's reasonable to wonder if they've worked it out at all.

But some critics have leaped to the idea that the administration wants Ebola in the country. Limbaugh says the progressives believe that Ebola is our just desserts for slavery. I can't remember hearing that from the progressives I know, but Limbaugh talks about it quite extensively. Well, we know that Obama and liberals/progressives want to destroy the country, so Ebola would be nifty tool to do it.

Alex Jones thinks Ebola is a great tool for imposing "the medical tyranny state." First you bring people with Ebola into the US, then you release them to spread it around, and then you lock up and/or disappear Americans accused of having the disease. This warning, among others, is helpfully packaged on this Tea Party site, so you can clearly grasp what the real story is.

Contrast this "we-are-doomed" thinking with some scientific observations. Only two people carrying Ebola are known to have left the infected countries by commercial flights. Checking passengers for fever and the cost of tickets appear to have done a good job of deterring infected people, though not a 100% effective job.

Also, it's a fact that the US has handled Ebola patients successfully in this country, so we don't have to take a zero tolerance approach. We can balance the risks: the risk of one or more infected people arriving in the US vs. the risks of cutting off air travel.

Observation also shows that Ebola hasn't spread through casual contact. The only people infected (so far) in the US have been healthcare workers caring for a single patient. No one who had casual contact with the patient, not even the people who shared the patient's apartment, has gotten sick. Observation shows that healthcare workers at the Dallas hospital became infected, but not those at the Atlanta hospital.

Observation doesn't show any connection between Obama and who has gotten infected. So how is Obama responsible? The connection is only possible if you make assumptions, not if you depend on observation and logic. Those who are bashing Obama for presence of Ebola in the US have a bit of a logical case. He could have forbidden the travel of anyone from the effected region. But the bashing goes so far beyond that, and the predictions have been catastrophic because Obama is such a catastrophe himself. By warped logic, Obama is awful, and therefore any awful thing that happens is directly attributable to him.

And by the way, the new Ebola czar that he just named, that guy is a disaster too. Already. He must be, because Obama appointed him. 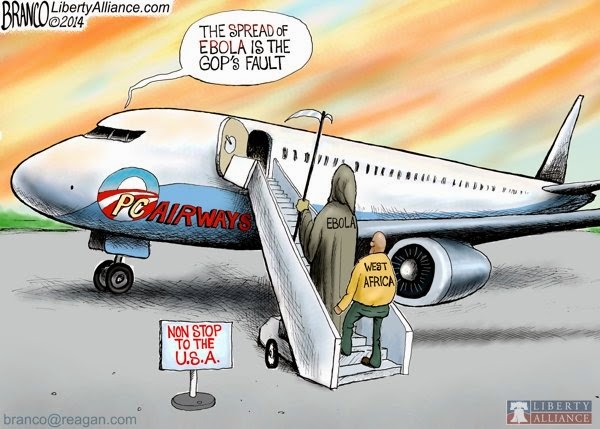 
Extra. Zero Hedge starts by warning that your civil rights will be gone if there's an Ebola outbreak, Then he warns that Ebola is a "very, very serious disease," and that "we could truly be looking at the greatest health crisis that any of us have ever seen."

So which is it? Should we be protecting our rights and freedom of movement, or should we be cautious of our health? I wish he had decided before he wrote contradictory warnings in a single post.

Posted by ModeratePoli at 11:30 PM