Last weekend Karl Rove had an extended interview with the Wall Street Journal. This weekend it was Grover Norquist.

That's two weeks in a row that the Wall Street Journal has featured the politically dead or mortally wounded. What is the message or strategy of the Journal? Is it telegraphing the names of the goners among conservative pols/pundits, and are these interviews their valedictories?

Damn, now I'm hooked. I have to watch next week to see who the next corpse is. 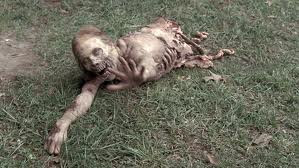 ... or maybe the US Chamber of Commerce.

Update 12/1/12. The Wall Street Journal interviewed House whip Kevin McCarthy (paywalled). Probably a boring episode, and he may not even be politically dead.
Posted by ModeratePoli at 11:02 PM

Slightly off topic but I can clearly see that zombie from one of the first episodes of The Walking Dead!

Back on topic - I wonder how our parent's generation dealt with tax increases, particularly in the 1960s when the highest marginal tax rate hit 90 percent?

Actually, PJ, your first comment was on topic. But I'll try to answer the second. I was in elementary school during the 60's, but I do remember my father just paying the surtax to support the Vietnam war.

At that time, making a living was easier. No Medicare tax, lower SS taxes, lower cost of living and health expenses. I may be nostalgic, but I'm also realistic that there's no going back. Competitive forces, you know.

...and our parents generation was also quite willing to make do with less until they could afford it, a lesson that governments could learn but seem to be incapable of doing.

@PJ, a good point about doing with less until we could afford it. When and how did that change?

However, I'd point out it's not just a problem for government, but is rather a way that government reflects the people. The people have rarely restrained government (specifically federal government) from spending more.