Negotiations at the edge of the fiscal cliff

This will be an unsourced piece, and unfortunately, that means I'll be doing that reviled job called punditry. But I've actually been pretty pleased with some bits of my own punditry, so here goes.

Congress and President Obama have 7-9 weeks to work out a deal prior to the expiration of the Bush tax cuts. When these tax cuts end, almost all the paycheck earners in America will have some nasty news, hence there is HUGE incentive for both parties to strike a deal. (For those who need a review: The GOP wants to keep all the tax cuts. The Dems want to end the tax cuts for the highest earners.)

Obama has issued a veto threat, but he won't have to veto anything. The Senate won't be passing anything the prez can't sign. Boehner is pretending he won't budge, but he surely will due to the huge incentive I mentioned above. There is also the recent history, which includes Dems and GOP negotiating the August 2011 debt deal and the GOP caving on the Social Security tax cut extension.

So there will be a deal, either before the end of the year or early in January. It might be a deal to extend the tax cuts a few months as serious negotiations take place, but there will be something. The exact form of the deal I can't predict. However, I definitely predict that Dems will include sunset provisions or other provisions that don't take effect yet, but require additional votes. This will provide Dems with leverage that is so valuable. The Dems will also try to reduce GOP leverage by including automatic debt ceiling increases without a vote.

I predict some very disappointed Republicans/conservatives. This is an easy prediction because the Dems have a lot of leverage, and the GOP is in a very weak position. 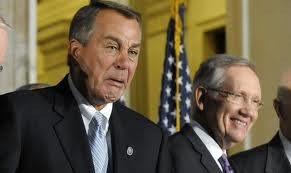 By the way, the sequester issue is not nearly as major because Obama has a fair amount of control over the timetable for parceling out the sequester cuts. He can make them tougher or gentler as he needs for his negotiating position. He's already announced that they will start off gentle, especially on defense contractors. Again, this is a leverage advantage for the Dems.

Update 11/17/12. There are so many angles on this, that I forgot a few that I wanted to mention. The deal will come out of the Senate, and the House will reluctantly pass amid much gnashing of teeth and perhaps some vomiting. In this way, the House will continue its tradition of NO COMPROMISE, that  is, passing dozens of grandstanding bills before caving to the deals worked by some senators. Sigh. I'm tired of these children--maybe we should abolish the House.

Posted by ModeratePoli at 12:05 PM

If Obama and the Dems stick to their positions, the GOP will have to cave, but probably not until after the cliff -- which is really more of a staricase than a cliff since it can be stopped or reversed at any time -- is breached and people start to howl. Then, Obama's argument that the GOP House pass what everyone agrees on -- extension of the tax cuts for the middle class -- will become too strong to resist lest they take the full blame for the pain inflicted in 2014.

The GOP gambled on defeating Obama in 2012 to get everything they wanted, and lost. Obama has to make them pay up on the wager. I suspect this time he got the message.

I think the Dems have some flexibility in their position, but it can't be the status quo. So, in many ways, they are showing a lot of willingness to take and meet close to half-way. The GOP, on the other hand, has been the rigid side.

This is the background. If we go over the cliff, it'll probably be due to the GOP. It helps the Dems if IT LOOKS like it's due to the GOP, and not due to Dems suddenly wanting the whole ball of wax.

I think the GOP will have around to at least a partial settlement no later than Jan 15.

Also, the biggest "cliff" is the change in tax withholding. Regarding the sequester, the prez can finesse it to soften its impact in January--that's what he's already indicated to the defense contractors. So it will be the tax withholding that will be very noticeable in January if these warring guys take us over the cliff.