What conservatives say about Romney now

At the beginning of November, I asked this:
Now there's an answer.

I should've seen this coming. The conservatives were overjoyed with the gentler Romney when he surged in the polls in October. But then there was immediate amnesia about that change when he didn't win. If he had won, there would have been no acknowledgment that moderation had anything to do with it. 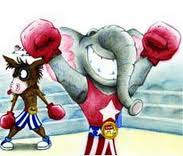 Note: Not all conservatives are saying this. Many are looking at the demographics and analyzing what campaign messages were counterproductive. Yes, there are some reality-based conservatives too.

Posted by ModeratePoli at 10:56 AM